Tonight on TypeCastRPG we’ll be attempting something new. We’re going to work some game mechanics from the LEVERAGE role-playing game into our D&D 5e session to role-play a heist. 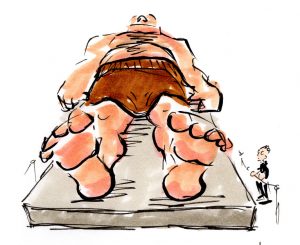 Our Goal: to free a comatose giant (one of the gods of Vaeron) from the clutches of the people who are about to purchase him at auction, and then mine his body for magical materials.

Our Resources: A couple of allies, a paltry assortment of level-appropriate magical gear, and an artifact that lets us speak to the gods…

Our Team: five 7th-level characters.
In Leverage-speak, they are:

(If we can live up to this image, it will be epic)

Join us tonight at 9pm Mountain!
Hopefully I’ll have enough brain-cycles to role-play some proper grifting AND to crank out some fun session art.