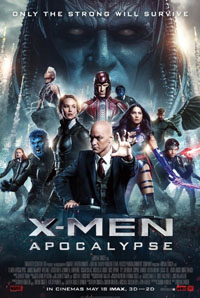 As much as I enjoyed this movie, I am very much ready for a superhero movie in which the story is not about how we react to the existence of superheroes. Apotheosis makes for a good story, and that’s why we have gotten so very many films that deal with it, and quite a few of them have been excellent, including this one.

X-Men: Apocalypse clears my Threshold of Awesome (no shaky cam! Not even during the scene where all but the pure in heart would have said it’s okay to shake the camera) and as far as I’m concerned it is a worthy successor to X-Men: Days of Future Past in pretty much every way.

Jennifer Lawrence, Michael Fassbender, and James McAvoy all turn in stirring performances, and the newcomers (new to me, anyway) held up their end of the stick with the sort of heroic aplomb that is required when a story about actual absolute power is being told.

I’ll keep this as spoiler-free as possible. The Daredevil series on Netflix is worth the investment in a Netflix membership. It’s richer and more powerful than any cinematic superhero story, and while it is dark, it is not the trendy kind of dark. It’s the kind of dark a good storyteller uses so that when we get light, the light is blinding and brilliant.

If you don’t mind spoilers, this discussion of Catholicism in Daredevil is worth reading. If you’ve already finished the series that article will deepen your understanding and appreciation of the series.

The story of Daredevil goes well beyond what’s actually in those 13 episodes, and I’m not talking about what’s coming next season. The very existence of that story, in that format, on Netflix, is the beginning of a much broader narrative about the future of entertainment.

Finished Netflix’s Daredevil. If this model for episodic programming survives we are in for a story-driven entertainment renaissance.

I’ll stand by that statement.

Back in 2013 Kevin Spacey said similar things when he talked about how House of Cards couldn’t be the show they wanted it to be without Netflix freeing them from the “shoot a pilot episode” business model of the networks. Here he is, saying those things.

I got chills when I first watched the excerpted version of Spacey’s speech back in 2013 (full version is here.) I watched it again last night after finishing Daredevil and I am convinced that Kevin Spacey has correctly prognosticated the future of the entertainment industry. House of Cards (which I don’t much like, but that’s irrelevant) and Daredevil serve as proof that Netflix can provide a superior business model for episodic storytelling, and that by so doing they’ll give us better stories.

We talk about storytelling quite a bit over at Writing Excuses.  Brandon, Dan, Mary, and I have recorded well over fifty hours of discussion in bite-sized chunks, and one thing we keep coming back to is the power that can be wielded by storytellers who know what they’re doing, and who have the skills and the space in which to do it. Episodic television has gotten much better in the last twenty years, and it will get far, far better once it finally breaks the shackles of legacy network business practices.

That doesn’t mean that all the stories will be great ones. It means that the great ones are going to amaze us. I’m really looking forward to this. 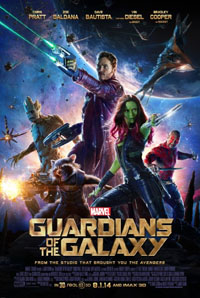 Guardians of the Galaxy accomplished what The Avengers accomplished, and it did it without requiring four movies of character development. The filmmakers delivered an ensemble superhero space-opera, gave us five fully fleshed-out characters, and had us laughing and cheering (and stoically holding back tears) through the whole film.

This is one of those films I want to watch again, only with a notebook. I want to to study it and figure out how they did what they did. Lots of it was brilliant writing, but the actors sold those parts to me, and the director, the editors, and the huge crew of technical wizards sold me the whole universe, and a really rollicking story.

I had a blast. So yes, it takes my #1 slot for the year, and I don’t expect it to be displaced.

My eleven-year-old son also heartily recommends it. He said, and I quote, “this is the best movie,” jaw agape, at least twice during the film. He was cheering for the characters in the final scenes. I had to shush him, because he was starting to cheer louder than the other people in the theater.

[UPDATE:] As was pointed out to me on the Twitter, and I quote:

@ajchid: You liked the hilarious space opera about a group of heroic ruffians from diverse, morally ambiguous backgrounds? Hmm…

If you’re at this website reading this review because you read Schlock Mercenary, and you think that movies its creator enjoys might also tickle your fancy, there is a reasonable chance that you will love Guardians of the Galaxy because it scratches your “I want a Schlock Mercenary movie” itch. Assuming you have such an itch.

(Oh, yeah. Sergeant Schlock can totally be described as a blobby cross between Groot and Rocket, with “I want to eat that” substituted for “I want to steal that.”)