I got my genes scanned, and we found cool things. For starters, we found that we could get my genes scanned by using FedEx to send a Q-tip to a laboratory. The 21st century has its problems, for sure, but it’s really, really cool, too.

MTHFR looks like an abbreviation for something impolite. It isn’t—not unless you think words like methylenetetrahydrofolate reductase are impolite. The salient point here is that the MTHFR gene, which codes for the production of that methylwhatsit folate stuff, is not working quite right for me. Most folks can get the vitamin B12 they need from folic acid supplements. I don’t do very well at turning folic acid into usable B12 folate, so I either need to go back to nature and eat lots of leafy greens, or I need some special folate supplements.

Did you know that avocados have lots of B12 in them? And I like them a lot more than I like kale.

We found other things, including a strong indication that my current antidepressant, bupropion (Wellbutrin), isn’t the best choice for me. Over the next few weeks we’ll be changing my meds, feeding me some methylfolate supplements, and putting more avocados in my diet.

Probably not on toast, though.

Have a look at Windyty.com.

Spin the globe, zoom in and out, click the overlays.

As you play you will learn some things about our world. Nifty things, trivial things, and critically important things.

Like, for instance, why humans finally decided that they’d rather dig a ditch through a continent than attempt to sail around it. 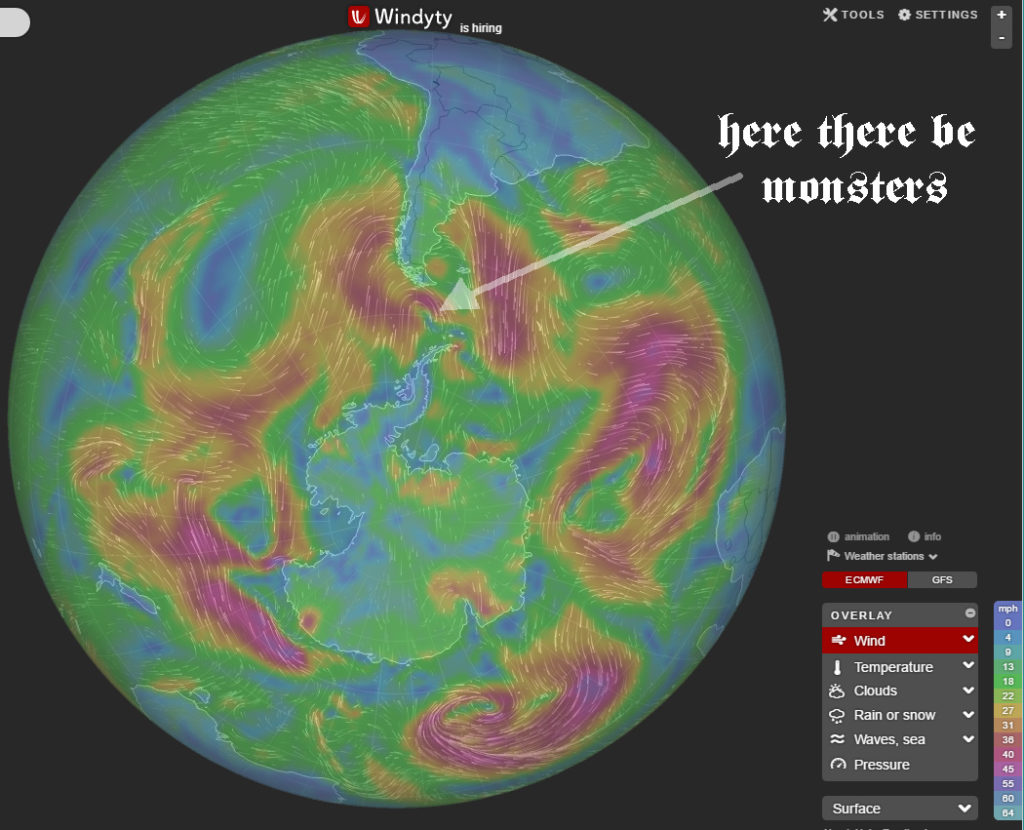 I’ve bookmarked the site, and will make it part of my trawl anytime something interesting is happening with the weather.  And anytime I want to see why there aren’t more pleasure cruises running between Argentina and Antarctica.

Monday, July 4th, 2016 is the 240th anniversary of the signing of the Declaration of Independence, when a band of plucky colonists told England “you are not the boss of us.” The event is typically celebrated by launching things into the air and watching them explode.

Monday is also J.O.I., Jupiter Orbit Insertion, in which the Juno probe, which was launched into the air (and out the top side of it, and beyond) almost five years ago,  will hopefully not explode as it fires its main engine on approach to the largest planet in our solar system.

This NASA teaser is fun to watch.

It’s not as crazy-go-nuts as Seven Minutes of Terror¹, but it’s pretty awesome.

If you’re like me, you can’t get enough of stuff like this. I surf news sites looking for more story, more pictures, more explanations. This time around I went straight to the source, and discovered that NASA had very helpfully linked a 90-page press kit.

Skip the news sites. Go straight to the stuff NASA has provided. It’s a relatively easy read, with lots of diagrams, and unless you’re an astronomer, rocket scientist, or Bill Nye², you’ll learn stuff.

Do you have children who are home from school this summer? School is back in session! Read up, and maybe grab the NASA Eyes app to watch as word of the JOI burn comes back from what will be the fastest-moving object³ in our solar system.

Or you can go outside and throw little rockets around. Whatever. I’m not the boss of you.

¹Trivia: The Curiosity Rover stuck the landing one year to the day after the Juno mission launched. Also, I have DARE MIGHTY THINGS printed out and hanging above my workstation.

²Or Phil Plait, or Emily Calandrelli, or Neil deGrasse Tyson, or okay it’s a long list.

⁴Light travels at 299,792 kilometers per second, so Juno would have to be going over 4,000 times faster before worrying about the Universe pulling it over and writing a citation.

The current storyline has some people wondering if I’m “taking a page from Mass Effect,” or perhaps [insert popular SF here.]

For the record, I’ve played about 60 minutes of Mass Effect, and didn’t love it. I moved on to other games.

I am, however, familiar with Fermi’s Paradox, and have extensively explored the solution sets, none of which are particularly optimistic. Those sets look quite a bit different if they are constrained by the canon of the Schlockiverse, but not so different as to be internally inconsistent.

What this means is that yes, among a hundred thousand readers, somebody will definitely be able to correctly guess key plot points. Science has been grinding on this stuff for decades.

But I’m not borrowing from anybody else’s fiction for this. I’m going whole cloth from the science. What THIS means is that despite the likelihood that 100,000 Schlock Mercenary readers can generate a speculation set that contains actual plot, I’m still going to surprise you.

But only if I shut up now.

So, you know, speculate among one another, but not here (comments are closed,) and for the love of hull integrity, please show some respect for a different boundary, and do NOT ask ME about this stuff.