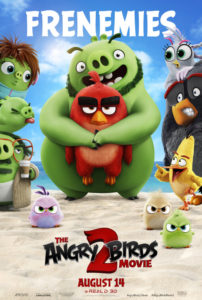 You may recall my surprise when I loved The Angry Birds Movie, and enjoyed it more than I enjoyed Captain America: Civil War. That’s a pretty high bar to clear, especially for a sequel, but The Angry Birds Movie 2 takes a really good run at it, and, at least in places, out-performs the first film for me.

Here’s a metric. I almost laughed myself unconscious one time (something which I can actually do thanks to asthma). The first film almost did that to me three times. (So, three times it almost did it.)

This doesn’t mean the first film is three times better, or three times funnier—just that it surprised me more. And I suppose that’s more my fault than it is the film’s. I study humor for a living, and went into The Angry Birds Movie 2 expecting some amazing joke-craft, so I was (mostly) ready for it.

The Angry Birds Movie 2 may have an oddly-constructed title (is there an extra word in there?) but it crosses my Threshold of Awesome nonetheless.  I’ll be buying the Blu-Ray, too, because re-watching these films and studying the way the animators, writers, and voice actors work together to craft a joke is, in fact, part of my job, making the disc a business expense.

I’m super fortunate that there are no laws against business expenses being fun, because this film is a lot of fun.