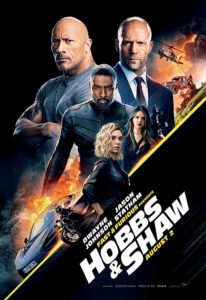 The F³ (Fast and Furious Franchise) is now the FFCU (Fast and Furious Cinematic Universe) and I’m just fine with that. Hobbs & Shaw crosses my Threshold of Awesome, and if you can accept that it’s just a sans-a-cape superhero film, I suspect you’ll enjoy it as much as I did.  My Suspenders of Disbelief went TWANG and my Trousers of Sit Here And Have Fun stayed on just fine.

BRAIN: “Cars don’t work that way”
SUSPENDERS: “These are magic cars”
BRAIN: “But… physics?”
SUSPENDERS: “Secondary-world urban fantasy. Different physics here.”
BRAIN: “That guy should be dead. Like, six times over.”
SUSPENDERS: “He’s a magic-super. His powers are ‘punch’ and ‘don’t die.'”
BRAIN: “What about the woman shooting things out of the sky while hanging on to a car as it barrel-rolls through a plate-glass window?”
SUSPENDERS: “I already said ‘magic cars’.”
BRAIN: “She’s not inside this one.”
SUSPENDERS: “Her super-magic is that if her brother asks if she trusts him, and she says yes, she can be super-humanly awesome while touching whatever car he’s driving.”
BRAIN: “That power seems a bit narrow in focus.”
SUSPENDERS: “It’s a good thing the two of them figured it out before he barrel-rolled their car out a fifth-story plate glass window.”
BRAIN: “She let go of the car for a moment there, it looks like. Not touching it.”
SUSPENDERS: “That’s kind of like kryptonite. It adds tension to the scene.”
BRAIN: “Tension. That’s what that was?”
SUSPENDERS: *TWANG* “The trousers are still on, yes.”
BRAIN: “How can you even—”
SUSPENDERS: “MY super-magic is if I trust the movie to be fun, I can suspend all the disbelief.”