It’s been a week. If you haven’t seen Star Wars: The Force Awakens yet, I completely understand. Theaters have been packed. This review may spoil some things, however, so by all means click away from this page now. 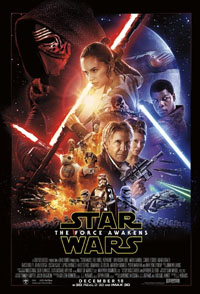 Don’t get me wrong, however. Star Wars: The Force Awakens was an amazing and powerful film. The Star Wars prequels made so many terrible mistakes that they ruined the franchise for me. That I again have interest in, and hope for the Star Wars franchise is close to miraculous.

An examination of the craft of film making is in order here, but I need to see the film a few more times to cement my thoughts. For now, I’ll summarize.

And I mean “better.”

That said, Star Wars: The Force Awakens suffers from a story structure problem, likely  the result of a decision to move away from the Campbellian Monomyth, or at least obscure the Hero’s Journey a bit. On the upside, it makes the film less predictable. On the downside by stepping outside the syntax of Western cinema, the audience may end up confused. There are several places that feel weird, moments about which my inner writer is complaining. I don’t think those problems are accidents are oversights. I think the writers are experimenting, or perhaps playing the long game. I’ll reserve judgement for now.

The film’s biggest weakness, to my mind, is that Star Wars: The Force Awakens cannot escape the legacy of the films that came before it. In 1977 Star Wars changed the face of science fiction forever. That level of surprise at what a film can be is impossible to deliver again. In 1999 Lucasfilm tried to incite a similar revolution in the industry, and they gave us some of the most reviled blockbuster movies of all time. Like it or not, that’s also part of the legacy behind Star Wars: The Force Awakens.

In short, we remember having been amazed, and having been betrayed by this franchise. We cannot help but compare Star Wars: The Force Awakens to six other films.

Me, I think it stands up really well.