Finally, you get to read Barsk: The Elephants’ Graveyard, by Lawrence Schoen. 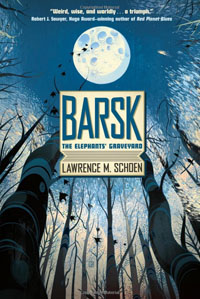 I got to read it early this year, and I loved it. I wanted to tell you about it, but I was told in no uncertain terms that I needed to wait, because you would not be able to have it until the very endmost days of the year, and we would all be happier (you, me, Lawrence, and the publisher) if I held off.

This is science fiction that gets the aliens right. With no human POV characters, our only eyes into the story are alien ones, and Lawrence does this so well I felt like I was a wrinkled, hairless historian with a prehensile snout and oversized ears.

I say “aliens,” but that term will get quibbled over. Barsk is a wet, cloudy world settled by the Fant, creatures who, as the full title of the story suggests, bear a non-coincidental resemblance to Earth’s elephants. The setting is, technically, an anthropomorphic one, but saying “oh, it’s an anthro story” does the book an enormous disservice. Barsk is to anthropomorphic, “furry” fiction as Heinlein’s Starship Troopers is to Lucas’s stormtroopers.

The story is part detective story, part adventure, and part “idea” story whose central conceits do a delightful job of blurring that line between sufficiently advanced technology and magic. It hits familiar notes in ways that tell me “this is like other books I love,” and then delivers new notes in ways that remind me why I like reading stuff that is actually new.

I’ve raved over Lawrence’s “Amazing Conroy” stories before. As delightful as those were, Barsk: The Elephant’s Graveyard is better, and for all the right reasons.