The Happy Madison/Columbia Pictures big-budget, big-screen remake of the brilliant short film “Pixels,” by Patrick Jean, could never be as brilliant or cool as the short was. I wanted to see it anyway, and I went in knowing that I was in for 110 minutes of Adam Sandler’s “loser makes good” shtick. 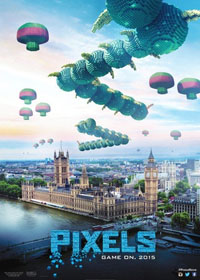 My low expectations helped! Also useful: my sons, both avid gamers, were really enthusiastic about seeing the movie, and they weren’t at all jaded about the performers (in part because I’m a good parent, so they don’t have a dozen hours of Adam Sandler dumped into long-term memory.)

But most surprisingly of all, the film delivered fun video game references without showering us in raunchy Sandlerisms. His character was genuinely likable, and the comedy actually worked.

The movie lays down its ground rules early in Act One: this is a universe in which a goofball played by Kevin James can become president, and will invite his underachieving, TV-installer childhood friend over to the White House regularly enough that security recognizes him. A proper action movie would spend the first two acts building up to that possibility. Pixels tells us to accept it early on, so that our Suspenders of Disbelief won’t be strained later in the film. Which, to continue the metaphor, probably means that the first act steals our pants, ensuring that there’s no work for the suspenders to do at all.

It’s a good thing, too. If you spend any amount of time asking questions that begin with “wait, wouldn’t they just…” you will almost certainly lose whatever opportunity you may have had to enjoy the film. It’s a precarious position for a film to take, I know. But there it is.

I get upset when people tell me “just turn your brain off.” That’s a pointless thing to say after the movie is over, and if that disclaimer is actually required before the movie starts, something has gone wrong. Pixels invites you to shut down some of the logic circuits during Act I, which is how movies that need you to turn your brain off should be handling it: up front.

Don’t get me wrong, here. I’m not defending Pixels as great art (Patrick Jean’s “Pixels” yes, Happy Madison’s Pixels no.) It could have been a much better movie had different decisions been made early on, but once your green light is locked into a feature-length story of video game attackers pixelating targets on Earth, numerous “great art” paths are closed to you, and you do the best you can. Even so, Pixels could have done better. The movie’s energy bled away pretty quickly when we didn’t have pixelated action on screen, which suggests a pacing problem, which in turn suggests okay I have no idea what that actually suggests since I write stories but I do not make movies. All I know is that some of the parts just didn’t work for me. Everything else is Armchair Eberting.

Pixels enters my 2015 “fun” rankings at #14. It missed the Threshold of Awesome by a wide margin, but it did not disappoint. And my sons loved it.

(Note: Patrick Jean, who created the original short, was given credit among the writing team for the big-budget Pixels. This makes me happy.)