This is a comic book movie in some of my favorite ways.  It’s full of references to Marvel canon that you don’t have to catch, it strikes the right “reluctant hero” notes for me, and it’s funny. The sequence of posters starting here on IMDB works really well for me. 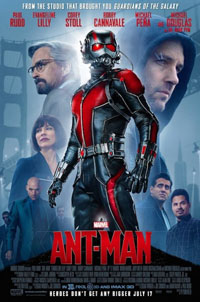 It does not clear the high bar set by The Avengers, however. Also, it invokes comic-book physics, but fails to invoke them consistently. The rules change in ways that seem like they should be pretty important, and which are blindingly obvious, but the inconsistency is NOT a story point, so paying attention is just distracting.

Here’s the problem in a nutshell: We are told, and even shown, that shrunken Ant-Man can hit like a hundred-and-fifty pound ball-bearing. In ant-mode he dents cars and cracks tile. Perfect! He didn’t lose any mass. Just volume. The science behind the “Pym particle” is all kinds of ridiculous, but the initial explanation, which says that atomic distances are decreased, serves the movie just fine.

But for comedy, we need to have Ant-Man riding Thomas the Tank Engine, or getting swatted out of the air with a wave of the hand. Oh, and for about half the action to work, Ant-Man needs to be able to ride on ants.  That’s not something a one-hundred-and-fifty pound ball-bearing can do.

“Which is it?” I kept asking myself. “Tiny and heavy, or just tiny and cool?”

The fix, obviously, is for the Pym particle to be able to variably effect the expression of mass by affected matter. Sometimes Ant-Man is heavy, sometimes he’s not. But if they’d invoked THAT, then there are a host of other abilities he could have used, and should have used, starting with flying high above his target on the back of a flying ant before dropping fifty feet through the skull of the enemy goon, and then expanding to full size in a shower of gore. And, well, this isn’t that kind of movie.

Did I enjoy it? Absolutely. It doesn’t come anywhere near being my favorite film of the year, entering my list at #8, but it did clear the Threshold of Awesome, and was a much more enjoyable movie than I expected it to be.