Minions crossed my Threshold of Disappointment, which is quite an accomplishment considering the fact that I really didn’t expect much from it.

I think the core problem was that I didn’t care. Nothing seemed to be at stake. Sure, there were some funny moments, and the animation was brilliant, but ultimately the film failed to connect with me anywhere. 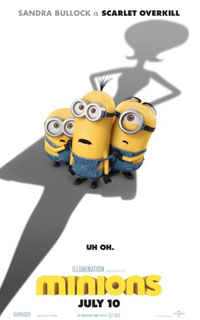 Like Penguins of Madagascar, Minions attempts to take hilarious side characters and extend the hilarity to a feature film. Minions was hobbled by one of the key rules of the setting: the Minions themselves must never speak intelligibly.

Remember WALL-E? Imagine the first act of that story with a narrator interpreting it all for us.

That is exactly what happened for the opening scenes of Minions. I don’t mind having a narrator set the tone, and Geoffrey Rush was great at that, but when the narrator must tell me what a character is thinking, feeling, and saying, something has gone terribly wrong.

Minions enters my list at #16. If you’ve got kids who are begging to see this, my advice is to take the money you would have spent on that, and buy something cool for them with it. Then rent this when it comes out on DVD.