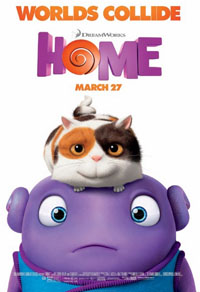 I really liked Home, though it surprised me straight out of the gate with an unexpected, and pretty hard-to-swallow premise: the aliens invade and relocate the humans to Australia, and the human military is nowhere to be seen.

To quote Harrison Ford, on the set of Star Wars when Mark Hamill had a continuity concern, “Hey, kid… it ain’t that kind of movie.”

So… my expectations were set very early on, and then the movie proceeded to do wonderful things. I had a great time. Rihanna performed brilliantly as Tip, and Jim Parsons managed to sell “deep and meaningful” while nailing “silly” in his voicing of Oh.

I’ll admit, things were just a little too “tidy” for my tastes (How to Train Your Dragon spoiled me) but the film was delightful, and not only clears my Threshold of Awesome, it scoots every other film down a notch by being the most fun I’ve had in the theater so far this year.