I didn’t see Divergent (the first movie in the trilogy of which Insurgent is the second) because I found the whole premise too ridiculous to swallow, and while I like a single-threaded thought experiment as much as the next person (read: “they’re okay, but can I see the dinner menu?”)  the film itself didn’t look like it was going to reward my patience. 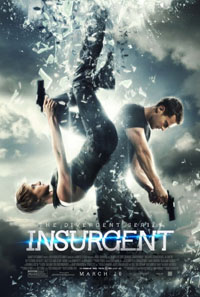 Insurgent, on the other hand, put some really cool visuals on display in the trailers. Also, the local IMAX has $5.00 showings on Tuesdays. I decided that for $5.00 I would shell out two hours for the chance to see those visuals all big and pretty-like.

The movie took far too long to get to them.

The story being told by the film, the CORE story, the protagonist’s journey, could have been told very well in a tight, 88-minute film that showcased not just the special effects, but also the impressive range of emotion that Shailene Woodley can bring to the screen.

Instead, it did what book-to-film transductions usually do — it compressed the story of the book, fulfilling some promises made in the prior stories, and including along the way a big pile of stuff that didn’t really matter to the core story of the film itself.

I understand completely the drive to be epic in scope, but for me an epic needs to have more foundation than an absurd premise–and when I say “absurd” I don’t mean “fantastical” like rockets and ray-guns, or dragons and dwarves. I mean “absurd” like “let’s pretend human nature works THIS way instead.”

Ultimately, for me, Insurgent commits the venial sin of taking an extra 30 minutes to tell a story, and spending those 30 minutes wandering a crumbled-concrete wasteland that has long since lost its appeal (sometime before Fallout: New Vegas, I think. I need to check a calendar.) It comes in #4 for me fun-wise this year, but it does not clear the Threshold of Awesome.

On a semi-related note of clumsy silliness, I really liked the music, but when I went shopping for it I accidentally bought the Divergent score, by Junkie XL, who I had never heard of. It sounded kind of thin. It wasn’t bad, but it wasn’t what I’d remembered.

Then I realized my mistake, and went back to Amazon and bought the Insurgent score, by Joseph Trapanese. It sounds wonderful.

(Note: These are the film scores, not the soundtracks with the pop tunes on them.)