There are some new items, some limited items, and some on-sale items in our store this week! 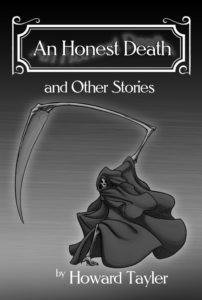 For more on-sale items, check out the On-Sale section of the Schlock Mercenary store!
First, the inciting incident:
We’ve had a few months of unexpected expenses, including one major appliance failure, two dental emergencies, and the urgent replacement of a video card and 32gb of RAM. Add to that the scheduled expenses of a kitchen remodel and two kids heading to college in the fall, and finances here at Chez Tayler are currently rather tight.
To the auction block! 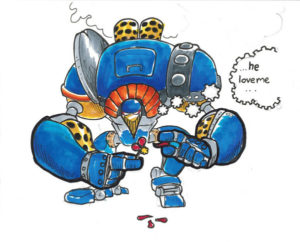 We’ve listed a few my originals on eBay. All of these are one-of-a-kind items, and some of them are unusual, like this  rare bit of fan art I did for Warmachine,  or the hand-painted ABS plastic Game Chief screens I did as prototypes. 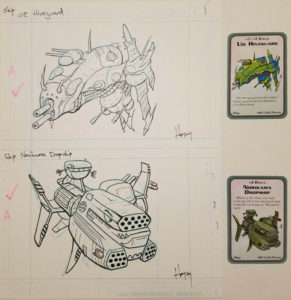 We’re listing seven sheets of original card art for Munchkin: Starfinder, and four of those sheets are uncut (like the page to the left), so they have TWO originals on them. Each sheet comes with the card(s) that Steve Jackson Games made out of what I drew.
Here’s the full list of our current auctions.
We also have several things discounted in our store. including XDM: X-Treme Dungeon Mastery (I illustrated it ) which is out of print, so if you want it, probably don’t wait. 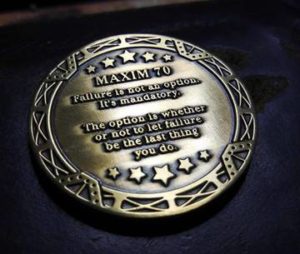 Looking for Schlock Mercenary coinage?
All of our commemorative and challenge coins are back in stock, including the the Maxim 70 coin, and the new key fob version of that coin, which has a hole for a key ring.
https://shop.schlockmercenary.com/collections/coins
Other Ways You Can Support Us

If you register with Schlock Mercenary via the right-hand sidebar, you can pledge monthly support via either Patreon or Stripe. Supporting members get access to high res versions of the strips, week-at-a-time browsing, and can even read Schlock Mercenary ad-free!

I’m about half-way finished with the book sketching—a little over half of the Delegates And Delegation books are sketched, and a little under half of the Broken Wind books are sketched. I had a super-productive session Monday evening (Feb 4th), sketching in over 200 books over the course of about seven hours. Sessions since then have been less productive, topping out at around 90.

If you’ve been watching this space hoping for movie reviews, I’m sorry to say I haven’t been going to the movies. It’s cold outside. Also, people who paid for books are waiting for me to get all this sketching done. I’ll definitely be in the theater for Alita: Battle Angel, and Captain Marvel, but I’m not behaving like a responsible movie reviewer this month.

It’s that time of year again, when our family room is full of boxes and the game table is covered with books. 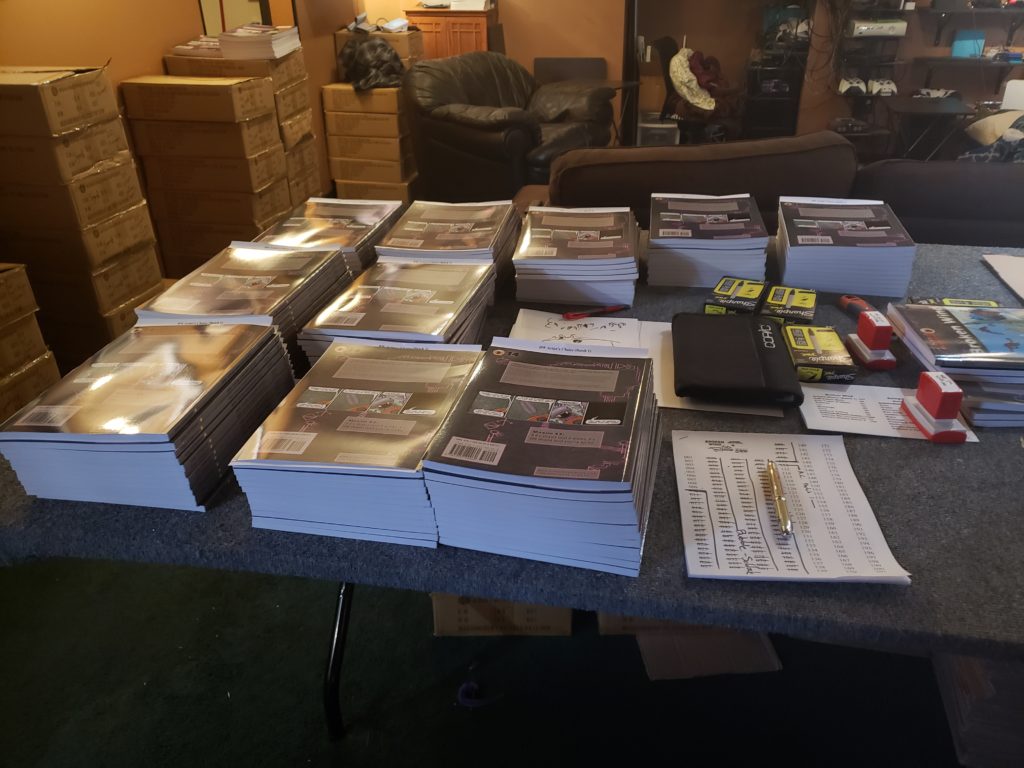 The signing is complete, but I still need to sketch in around 1500 books. The sketching is complicated by the fact that we want to ship packages as soon as they come ready, and almost all of the sketched-book orders contain two books. Oh, and people get to choose which sketch they want, from a list of about a dozen for each book.

I began with “Schlock in Bubble Armor” for book 14. There were 104 of those. When I finished them we could ship zero packages. I then sketched all 100 “Captain Landon” for Book 15, and at that point we could ship all of the packages which contained those two sketch editions.

There were forty-three of them. Not bad!

I moved on to the first batch of “Artist’s Choice” for Book 15. The overlap between that and bubble-armor Schlock was only 17. The overlap between that and Captain Landon was zero (because nobody ordered two copies of the same book) but now I have a table full of “Artist’s Choice” for Book 14, and the overlap is going to be around 80%. Which is to say, we would have shipped a lot more books sooner if I’d begun with Artist’s Choice for both Book 14 and Book 15. Sadly, neither Sandra nor I stopped to considered the Venn Diagram implications until after I was 100 books in.