Hey! I finally got back out and saw a movie!

Nothing screams “I am not a real movie reviewer” quite like me not seeing movies. But some of you seem to like knowing what I think about the latest cinematic releases, and I’ve been letting you down. There just hasn’t been time. 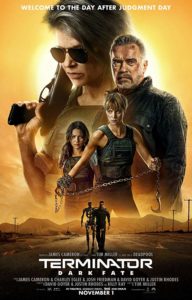 There wasn’t time today, but I went and saw Terminator: Dark Fate anyway, and I have no regrets. It’s a perfect Terminator film, and while none of the reveals were surprising, none of them needed to be.  Linda Hamilton, Natalia Reyes, and Arnold Schwarzenegger were perfect, and Mackenzie Davis¹ absolutely crushed it as the augmented soldier sent back in time to stop Gabriel Luna’s “Rev 9” Terminator. Luna was terrifying, and sure, he had help from the SFX department, but his robosociopath was easily on par with Robert Patrick’s, back when the franchise introduced us to liquid metal.

The film brought to mind an entire category of questions which are getting asked a lot lately:  what does the rise of the serialized franchise mean to traditional cinema? What do direct-to-streaming blockbusters mean for TV? What will all these streaming services do to my VHS² collection?

I don’t have any answers, but I do have a response. See, I remember seeing Star Wars in 1977, and thinking it would be AMAZING to have NINE WHOLE MOVIES telling a story, but I couldn’t possibly wait 27 years for the big finish. 10-year-old me would be pretty disappointed to learn that the central Star Wars saga would take more than 40 years to reach Episode IX, but that kid would shake off the funk when told that I’d get a 3-movie Lord of the Rings³, a 23-movie superhero epic which got told, start-to-finish⁴, in just 11 years, and that the nerdy, weird things I loved were appearing on so many different kinds of screens I wouldn’t be able to watch them all.

The Terminator films are not my favorite film franchise, but they’re pretty dang cool. They’re not be-all, end-all movies, but this latest one crossed my Threshold of Awesome. I’m pretty happy to have lived long enough to enjoy this latest era of cinematic output, and I look forward to enjoying as much of what comes next as I can make time for.

¹ Mackenzie Davis played my favorite character in The Martian. She was the one who figured out that Mark Watney was still alive. It was a small part⁵, but her performance still makes me tear up a little.
² Ha-ha I kid. I live in the future. I need a way to rip my entire blu-ray collection onto my FitBit.
³ I read LoTR in 5th grade. If any single road can be given credit for leading me out of The Shire it was that one, which my Dad put my feet upon by handing me a book.
⁴ I know, I know, the MCU hasn’t actually wrapped, but Endgame was a good enough ending that I’d be willing to let it end there.
⁵ The old saw about “there are no small parts” does a disservice to those scenes where an actor must carry the entire weight of the story for their few moments on screen, and where most it has to be carried without using words. Actors are amazing.