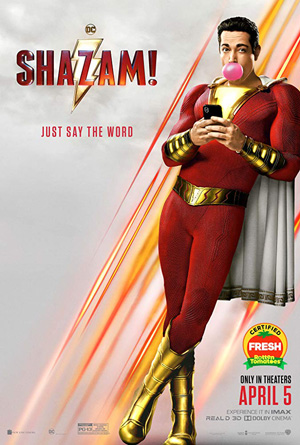 I saw SHAZAM! at the megaplex this morning. It started slow, but the familial relationships are central to the story—they’re much more than just a screen against which someone gets super-powers—so by the end of the film that slow start was completely forgiven.

I wasn’t excited about the possibility that the film might just be Zach Levi doing a 14-year-old adult, so I was quite happy when not very much of the film was Big with capes. Some of it was (there’s even a keyboard mat in a department store) but for the most part the conflict is that a 14-year-old superhero is inherently unprepared for super-powered villainy which has been practicing, and that was just fine.

Better than just fine, even. This is my second-favorite DC Comics movie, just behind Wonder Woman. It clears my Threshold of Awesome, and I’m looking forward to picking up the Blu-ray so I can watch it a few more times (a thing I am wont to do with things I like.)