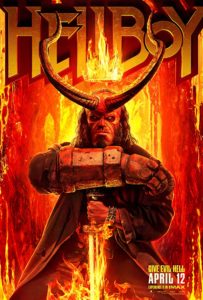 The new Hellboy film is fun, and gooey, and gross, and David Harbour does just fine taking up the horns and crown from Ron Perlman. Yes, Perlman’s chin (and entire demeanor) felt almost typecast for 2004’s Hellboy, but Harbour stepped up and delivered the goods.

The film is R-rated for graphic violence. The filmmakers chose to do cinematic renditions of the splattery enrupturing found in the Hellboy comics, and while I don’t ordinarily go in for those kinds of things, in this case I feel like it worked very well in service of the story.

Hellboy crosses my Threshold of Awesome, and I was excited to have an epilogue, a mid-credits scene, and an after-the-credits scene, because they did a convincing job of offering me more Hellboy films in the future.