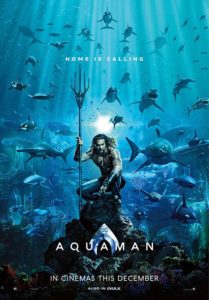 On the one hand, Jason Momoa is frighteningly formidable, so I would never tell him to his face that Aquaman was anything short of awesome. On the other hand, Mr. Momoa seems genuinely nice, very much not the sort of person to punch people for rude and uncalled-for comments. As it is vanishingly unlikely for me to meet Jason Momoa in a circumstance where I’d feel even remotely tempted to diss any of his work, none of this is relevant.

Besides, Momoa’s work was my favorite part of the movie. My only complaint is that Aquaman was far longer than it needed to be in order to tell the pair of stories it set out to tell. It is an origin story whose inciting incidents take place before the events of Justice League, and it is a hero’s journey story which takes place after the DC super-team-up. That may seem like a lot, but it didn’t need to take two hours and forty-three minutes.

That’s not to say that the film wastes any time. Everything happening on screen was interesting and/or beautiful and/or exciting. I was never bored. And really, how do you tell Nicole Kidman that she’s going to appear in a mere thirty-seconds of flashback? The woman deserves serious screen time, and she makes the most of it.

I suppose I could complain about the world building here, but DC comics has always pushed me out of the story with “Gotham,” “Metropolis,” and “Central City,” so I shouldn’t expect Atlantis to somehow make more sense.

It might be best, then, to compare Aquaman to the other DC Snyderverse films: it was far better Batman Vs. Superman, and Man of Steel. It wasn’t quite up to the level of Wonder Woman, but it did have five times as much Momoa as Justice League. I think it fares pretty well.

Aquaman doesn’t clear my Threshold of Awesome, but I’ll be picking up the Blu-Ray and watching it again when I can pause for trips to the restroom, and if you think it might be unfair for a relaxed bladder to be what puts a film over the top, well, you’re not wrong.