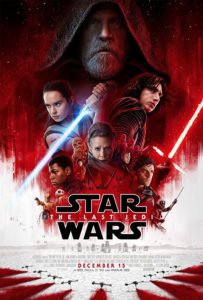 There has been quite a bit of noise on social media regarding the spoiler content in reviews of Star Wars: The Last Jedi, so I’ll be even less specific than I usually am when reviewing things that might easily be spoiled.

I saw Star Wars: The Last Jedi. Yay! Good Star Wars movie. Better than the previous two (which is a reasonably high bar to clear) and much better than the three that came before those (but that’s a very low bar.) Comparisons with the original trilogy are probably not useful, but if I had to sit down in front of a Star Wars movie again, right now, it would be this one.

That’s it for now.