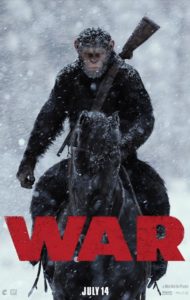 This film is best considered as part III of a trilogy, and that entire trilogy functions as a prequel to 1968’s Oscar-nominated Planet of the Apes. Or rather, as a prequel to a potential remake, which we don’t actually need but will almost certainly get (I’m giving the 2001 film a wide miss. It doesn’t seem to fit here.)

I’m amazed at how Caesar, Luca, Rocket, Maurice and the other apes have crossed the Uncanny Valley and become real-world people to my eyes. The actors behind the motion-capture did fine work, and the animators are obviously sorcerers who have made some sort of dark pact with an eldritch god of cinema.

War for the Planet of the Apes doesn’t quite clear my Threshold of Awesome, but it’s a very near miss.