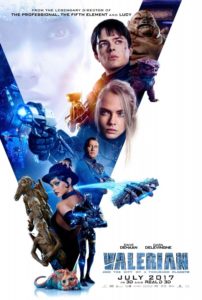 Valerian and the City of a Thousand Planets is easily the least enjoyable film I’ve seen this year. It started off pretty well, and then our main characters took the screen and the movie began to plummet through my ratings, landing squarely at the bottom long before the final credits rolled.

At least two people walked out of the showing early and did not return. Perhaps they could no longer stand the embarrassment of continuing to watch the movie, or maybe they stepped out to use the restroom, and found that the smell of disinfectant was such a refreshing change they prolonged their excretory lounging by an hour.

I really wanted to enjoy this movie. I was prepared to ignore major failings in order to get an awesome space opera fix. I brought my extra-strength suspenders of disbelief, and tried to pretend I didn’t care about character motivation, but it wasn’t enough. Not nearly enough. I found myself actually cringing in my seat, physically curling up in a sort of full-body wince, over and over, right up until the last scene, which was one of the worst of the film.

Here is a quick list of the movie’s top failings:

There were some things that the film did well, of course:

Valerian and the City of a Thousand Planets deserves top billing in a future season of Mystery Science Theater 3000. It was only slightly less painful to watch than Cry Wilderness or Starcrash. It clears my Threshold of Disappointment³, obviously, and does so with such aplomb that I almost feel like apologizing to Transformers: The Last Knight.

¹ Dane Dehaan is a fine actor. I can only surmise that the director very vehemently demanded the most wooden performance possible.
² Cara Delevingne was one of the best things about Suicide Squad. Again, it’s my theory that Besson⁴ required her to pretend to be a replicant with poor social camouflage, and trouper that she is, she nailed the performance.
³ Some people will love this film, and will be quite angry at how disappointed I am with it. It’s important to realize that our reactions to art are mostly due to what we bring with us. The art only activates what’s already in our heads and hearts. I really wish I had a bag full of “You’ll love Valerian” with me in the theater, but I did not.
⁴ I have loved some of Besson’s other work, particularly The Fifth Element, which is still one of my all-time favorite films.