The trailers for The Mummy suggested that it was going to be a supernatural horror film retreading ground that Universal Studios has already covered several times. There was no hint that the movie would have any joy in it. 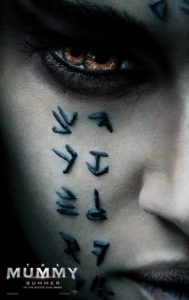 To my delight, there was a lot of joy¹. While not as outright campy as 1999’s The Mummy², it definitely leaned in that direction. Yes, there are jump-scares and spooky bits, but there’s also lots of witty banter, and a healthy dose of dark comedy. I had a pretty good time. My 16yo daughter really liked it too.

Fans of the 1999 film may be pleased to note that a prop from that film³ has a featured cameo in this one, suggesting that perhaps Rick, Evelyn, and Alex O’Connell share this universe with Jenny Halsey, Nick Morton, and Dr. Henry Jekyll (along with the rest of Universal’s DARK UNIVERSE stable of monsters and mortals.) It’s not explicitly declared, but there’s nothing explicitly ruling it out.

The Mummy (2017) doesn’t clear my Threshold of Awesome, but it was a lot of fun. It entered my list at #6 for the year, which is not too shabby for June.

² I’m sitting down to watch 1999’s The Mummy right now, while I ink. It’s like an old friend. A really old friend, who tracks sand everywhere, and doesn’t like my cat.

³ If you must know, it was the big gold book with the fancy star-shaped key. You’d think I’d know the name of my friend’s favorite book, but no, I do not.