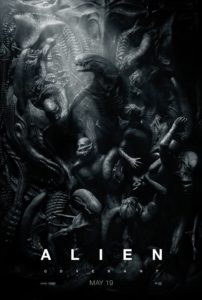 In a completely unsurprising turn of events, Alien: Covenant is not the feel-good hit movie of the summer. It’s powerful, and beautiful, and horrifying, and bleak, and thoughtful, and none of those things guarantee that it will be fun.

There was some fun, of course. I liked (in a sinking feeling sort of way) how they tied 2012’s Prometheus and 1979’s Alien together, explaining a few things that have always been puzzlers for me. Prometheus left me with more questions than answers. This movie left me wondering why Prometheus wasn’t just two movies in a row… until I remembered that in 2012 the Marvel Cinematic Universe was still a gamble.

I really enjoyed Fassbender and Waterston’s performances. Waterston seemed especially perfect, since she can shine with stoic confidence AND exude primal terror¹, and sometimes switch between the two while the camera dares us to try an not believe it’s real.

Fassbender was no slouch, of course. I’d say more, but describing how perfectly an actor does a particular thing is not always appropriate when the reader might not yet know that said thing is even a thing².

I loved the scope and scale of things in the film. This shot worked really well for me: human people for scale, really big things next to them, and something even bigger in the distance. And my eyes can’t find the seams between reality and rendering. We’ve come a long way in 38 years.

Alien: Covenant doesn’t cross my Threshold of Awesome, because my rankings are based on “fun.” It wasn’t disappointing, either. If you like the Alien franchise, this is a movie that is probably also something you’ll enjoy.

¹ I first saw Waterston in Fantastic Beasts, where even at her most heroic she seemed trodden upon. In Alien: Covenant, however, we see a dynamic range that makes her a worthy heir to Sigourney Weaver.

² If you watch the trailers closely you’ll pretty quickly figure out what’s coming next during the film, and which character(s) will be standing  too close to whatever is coming once it arrives. And that’s still no excuse for me to post spoilers.