For me, Ghost in the Shell was big-budget ‘meh.’ I liked it okay, but it didn’t clear my Threshold of Awesome despite some amazing story telling.

I think the best part of Ghost in the Shell is the implicit question, “what is truth,” in a society heavily overpainted with augmented reality. We could have hours of discussions about the issues that arise when two people look at the same thing, but see different things, and how this conceit—conflicting augmented realities—is simply an exaggeration of how real humans differently perceive the world we live in. 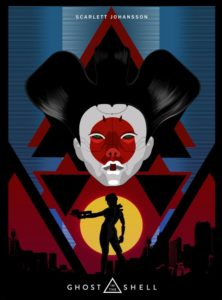 We can have those discussions without the film, of course, and it might be easier to do so, because most discussions spawned by the actual film will necessarily focus on why Scarlett Johannson wasn’t the right person for the part.

For me, her mainstream Hollywood looks (and race, yes) were distracting and alien, and in a way that kept pushing me out of the story. There are better ways to say “this person doesn’t fit.”

I recently re-watched Sherlock Holmes: Game of Shadows, and loved the way some of the big scenes were presented, with slo-mo, extreme slo-mo, and odd perspective cuts, mixed in with real-time action. These methods showed me how the characters felt about the mess they were in while simultaneously delivering some stunning visuals. Compare this to shaky-cam in the Transformers franchise, which is deployed as a shortcut, telling the audience that their own confusion is what the characters are feeling. 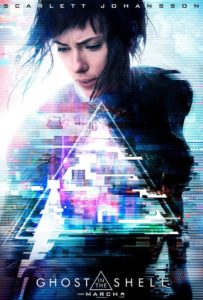 In short, “show, don’t tell.” Wherever possible, use the full suite of cinematographical tools to communicate nuances of story, rather than taking shortcuts.

That’s why I think Scarjo was the wrong pick for Ghost in the Shell. Her race and familiar looks are like shaky-cam, and will prevent many audience members from enjoying the story for having been pushed away from it. There are far better ways to say “this character feels out of place and alone,” and the filmmakers aptly demonstrated the skill necessary to make any of those work. I wish they had been given the chance.