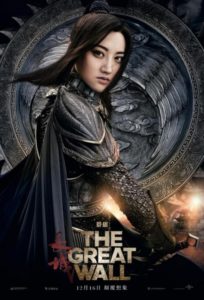 On the just-eat-your-popcorn side of the cinematic fence The Great Wall is a pretty good fantasy movie. It’s beautiful, the monsters are despairingly powerful, and the action sequences left me wondering if Cirque du Soleil performers were on the stunt team. It doesn’t clear my Threshold of Awesome, but if you want to eat popcorn in a theater seat this weekend it’s not a bad choice.

Many of you may be happy to leave it at that, but I do have further thoughts. Nobody is going to make you read them, much less agree with them.

On the critically- and culturally-aware side of that fence the film is problematic. I feel just a little bit guilty for not feeling too bad about it. The Great Wall seems very much like a Chinese film expertly shoehorned into Western theaters, which I believe to be safely on the non-appropriative side of the fence¹.  This may seem like a double standard, but I think the Chinese studios should be able to use whatever Chinese cultural elements they want to without reproach. Western studios, on the other hand, earn all kinds of reproach. Hollywood continues to earn scorn from lots of people on this front.

I really am going to to talk more about the film itself, but before I do I need to drop a caveat: the arguments regarding cultural appropriation are far too involved for this post, and no matter which side you take in those matters I’m not going to be able to change your position here. So I’ll give that a wide miss, and tell you why I’m okay with Chinese monster-fighting heroes atop the Great Wall of China having their story told from the point of view of a white dude with a Skyrim accent.²

First, this film is dominated by Chinese actors who are speaking Chinese. It’s heavily subtitled, with only five English-speaking characters³. There are at least a dozen big roles, and only three of them belong to European-flavored hominids. As a white guy, I felt like a foreigner in this film, and Matt Damon was a pretty good proxy for my POV. I’ve never been left wanting for films that represent my particular phenotype, but if you’re after my movie dollar, this casting decision makes sense.⁴

Our female lead, Tian Jing, is the one with all the power in this relationship, and kicks all kinds of monstrous hindquarters. She takes plenty of heroic action without impetus or assistance from the white dude (or ANY dude.)  I think that if I were an Asian female, I’d also feel pretty well represented. I think. I don’t actually speak for that group, obviously.

This demographic contrast is most clearly evidenced in the marketing for the film. The image above was created for Asian markets. Matt Damon’s picture dominates the marketing here in the West. Here’s a side-by-side, with a monster in the middle.

See how the monster stares into your soul? I think it’s asking you how you feel about the images to either side, and daring you to express a preference. And no matter what you pick, it will eat you.

If you want to do a cultural barometer check on yourself, page through the IMDB images for The Great Wall and ask yourself which ones speak to you. Like actual barometric readings there’s no wrong answer here. Just interesting data.

Okay, I said “problematic” way up above in the 3rd paragraph. The problem is that Matt Damon’s character fits quite cleanly into the Great White Savior trope, which has been pretty threadbare since Fern Gully. It’s somewhat mitigated by the “we can only do this together” shtick, and some solid protagging⁵  from other characters, but only somewhat. If this particular trope is a show-stopper for you, I think that The Great Wall is a show that you’ll stop watching.

I’ve run on for long enough, and need to go make comics now. I’ll leave you with this: The Great Wall is a pretty cool movie that I think got a bit more shade cast on it than it should have. I had a lot of fun, and many of you will too.

¹ Or “wall,” if you will. I’m too good a person to make that joke in the body text above, but too flawed a human to leave it lying around completely un-joked.
² Matt Damon is my new favorite Nord. His accent was subtle enough that my ear didn’t have to reboot, but Nordic enough that I desperately want him to say “Ysgramor” and “draugr.”
³ There are eight English-speakers if you count the three who die horribly in the opening scene. Spoiler alert, I guess?
⁴  I really enjoy seeing non-me-like people on the big screen. Studios should make more movies with non-me actors in lead roles.
⁵ Protagging is my word for when a protagonist takes initiative and does stuff to move the story forward. I’m proud of this word, in part because Brandon Sanderson uses it.