I’ve only seen parts of Kurosawa’s Seven Samurai, and it’s been so long since I saw 1960’s Magnificent Seven that I can’t recall any of the particulars beyond the presence of Yul Brynner and Steve McQueen. 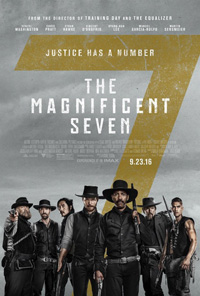 Contextually, then, I’m well suited to appreciate Antoine Fuqua’s Magnificent Seven for what it is, rather than for what it’s a remake of. I didn’t actually get around to seeing it until it had been out for a full month, but I’m glad I saw it in the theater. I really enjoyed myself (in part, perhaps because I was seeing it with my friend Alan.)

The film didn’t need that much help from good company. I loved the performances from Vincent D’Onofrio, Chris Pratt, and Haley Bennett, and I thrilled at pretty much every one of the scenes that establishes how deadly our heroes are. I also liked that they were each distinctly different, and not just in terms of diverse casting—they all dealt death in different ways.

In classical tragedy people are brought low by their flaws. Here, however, our heroes can die simply because there just aren’t enough good places to hide from the bullets¹. They can also die heroically, of course, and I won’t spoil who does what. I will, however, say that this remake does not improve the survival odds for the Seven².

In the final analysis, of course, Kurosawa’s Seven Samurai is a groundbreaking piece of cinema, while Fuqua’s Magnificent Seven is just a cool cowboy movie. Still, I liked it.

¹ I believe there were too many bullets. The Gatling Gun in use in the film used a 40-ish round box magazine, which required the gunner to stop firing and reload. The Model 1881 Gatling Gun’s “Bruce Feed” mechanism (which they did not use in the film) would have allowed for continuous fire of roughly 400 rounds per minute. And even that might not have been enough for all the bullets I saw.

² The survival percentages of our heroes are equally not great in Kurosawa’s Seven Samurai³ and John Sturges Magnificent Seven⁴ . Both of them round up to 43%.

³ “In the end we lost this battle too. The victory belongs to the farmers, not to us.”

⁴ “The Old Man was right. Only the farmers won. We lost. We’ll always lose.”