I watched Batman vs Superman: Dawn of Justice, Ultimate Edition two weeks ago, and must now make a confession: I rather liked it. 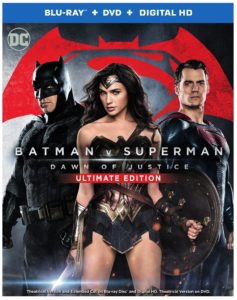 For those keeping score at home, this runs counter to my reaction to the theatrical release. The Blu-Ray felt like a completely different movie. Instead of being a gritty eyesore smeared brownly by disappointing portrayals of beloved characters, it was a compelling vision inviting me to distrust the shining, iconic gods of the DC Comics mythos, and then to hold out hope that these paragons of power might earn my trust again in future films.

Not everyone will have the reaction I did, and the stronger people feel about their Bats and Supes, the less likely it will be for them to join me over here. I tried to explain my thoughts to Jim Zub at GenCon, but the conversation did not go well. He punished me by forcing me to riff on “Deadpool” rhymes¹ all weekend.

I believe that the biggest reason the Ultimate Edition works is that key scenes are just a few seconds longer, allowing them to play all the way to their emotional payoff. Consider: the plot of a film can be communicated, start to finish, with trailer-sized snippets. The result will have zero heart because none of the characters will be on-screen long enough to earn the right to resonate with the viewer. As the snippets are lengthened enough to become scenes, and as the scenes are further fleshed out and allowed to become complete, the skeletal plot of the film becomes a story, and the story grows in power until it crosses some threshold and actually works.

In the theatrical release there is a scene where Clark steps, fully-dressed, into the bathtub with Lois. In the Ultimate edition he undresses, and Lois responds to this, to him, with passion. It’s not a full-on “naked-time” scene, but it succeeds where the theatrical release failed: it convinces me not just that they are in love, but that their love is deep, abiding, and above all important.

The Ultimate Edition also adds lots of completely new scenes, and I think the folks laying it out may have punched the colors up just a bit from the sepia-shifted pallor I suffered through in the theater. For all their work on the principal film, my favorite part of the Blu-Ray was the featurette on the history of Wonder Woman. I watched that and for the first time felt just how important a character she is, and how critical it is to our culture that her next big-screen portrayal be done well.

Batman v. Superman: Dawn of Justice, Ultimate Edition accomplished what I did not think was possible: it got me excited about what’s coming from the DC Comics movies in the next couple of years.