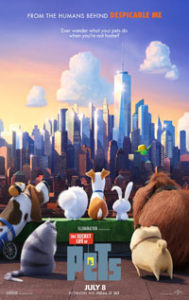 My 15-year-old daughter joined me in the theater for The Secret Life of Pets. She loved it, and while I enjoyed it quite a bit, I’m sure I liked it more for having her with me.

I’m not sure why it doesn’t quite clear my Threshold of Awesome. It comes close, and it certainly doesn’t disappoint, but it didn’t shine as brilliantly for me as did the stuff above that line.

A critical¹ analysis of the film might prove interesting. The main character, Max, is our protagonist, but he doesn’t appear to be the hero. He’s proactive, and is “protagging²” enough to hold down the protagonist job, but the character taking heroic action, the one for whom we’re actually cheering, is the dog who goes looking for him. This is an exercise that students of film, and of storytelling in general, may get quite a bit out of³.

Here’s my take on your weekend movie money: If the adults in the room are on the fence about which animated film to see this week, Finding Dory has more to offer. Kids (and especially kids with pets) are going to have more fun with The Secret Life of Pets.

¹For “scholarly” values of “critical.”

²I’m not sure if I made up this verb, or if somebody else did, but Brandon Sanderson keeps giving me credit for it. We use it from time to time on the Writing Excuses podcast. Protagging is what protagonists are doing when their decisions move the story forward. Often when we’re bored with a story it’s because the story is waiting for something to happen to the protagonist that will shove them plotward.

³The main character, the hero, and the protagonist do not all need to be the same person. They often are, but in stories with lots of interesting characters they just as often are not.