The Legend of Tarzan is a much more thoughtful film than I expected it to be. Also, it’s a much less predictable film than I thought we’d get. I was expecting Yet Another Superhero Origin Story, and that’s not what this was. Sure, we AGAIN see gorillas kill I mean John Greystoke’s parents, but it’s in flashback¹. 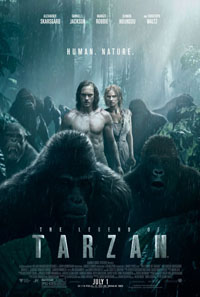 Our first glimpse of the film’s namesake is in England, where he sits sipping tea and rejecting a dubiously-extended invitation to go back to the Congo as a representative of the Crown. He and Jane have been Lord and Lady Greystoke for eight years now, and as he says in that scene “My name is not Tarzan. My name is John.”

At that point I realized that beyond the standard action-movie arc and the spoilery-bits from the trailers, I didn’t really know anything about the story I was about to get. This was cool.

One of the best things about this film was Samuel L. Jackson’s portrayal of George Washington Williams, a real figure from history², who I would argue is the actual hero of the film. Tarzan does impressive stuff, but Williams does the stuff that will matter in the end. Also, he gets some of the best lines. When someone says “you cannot keep up with Tarzan,” Williams responds with “No, but I can keep up with John Greystoke.”

The Legend of Tarzan doesn’t clear my Threshold of Awesome, but it does a good job of defying expectations, and telling a story that has more heart to it than just swinging through trees and screaming.

¹A gunshot, and then we go to extreme slow-mo. A strand of pearls snaps, and the individual pearls glisten and fly, while massive ape-fists, flecked with blood okay that’s not how it goes.

²The real George Washington Williams fought in the Union Army during the Civil War, fought under Espinosa in Mexico to overthrow Emperor Maximilian, and was the first African-American to be elected to the Ohio State Legislature. In 1889 he went to the Belgian Congo to observe the treatment of the Congolese people, and in 1890 he filed formal protests. He never got to do most of what he does in this movie, but even just a cursory examination of his life convinces me he would have loved to. Samuel L. Jackson plays him that way.