I put off watching this movie because I remember how deeply affected I was by Finding Nemo. I needed to pick a good mental-health day in which I could come home with time and head-space to process. You know, just in case. 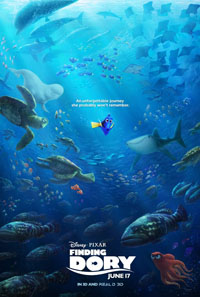 Without saying much more, let me say this: it’s a good thing I planned ahead, and I’m really glad I saw the movie. It spoke to me on multiple levels, and it said things that I believe really need to be said to a wider group than just me.

Early in the film Dory, who knows she suffers from short-term memory loss, is desperately trying to recapture an important thought. She says to herself, while pounding fin against her head, “Dory, stop being so Dory.”

It was poignant, and beautiful, and ugly, and true. Her name is the epithet she uses to describe what she hates about herself, and in that awful moment she’s not actually wrong. Broken, but not wrong.

It’s that thing many of us say to ourselves all the time.

For me, the film was operating on a much deeper level than I think it will for the kids. Like the best art, it has lots of levels, and rather than “having something for everybody,” like a grab-bag of directorial indecision, the many somethings operate simultaneously, in parallel. If you miss a layer because you’re wrapped up in a different layer, you’ll still enjoy the film. Also, you get to watch it again, and maybe get to see a completely different movie.

Finding Dory enters my list at #3, clearing the Threshold of Awesome.

By the way, the short that aired before it, “Piper,” is delightful, and is one of my favorite Pixar short films. No dialog, but plenty of story.