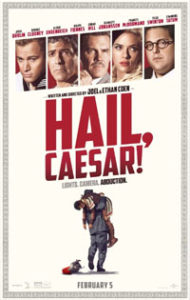 So far this year I’ve seen three movies, and all of them have been a lot of fun. Hail, Caesar currently sits at the bottom of my list, but it’s well above the Threshold of Disappointment.

Hail, Caesar is a movie for movie people. It’s full of SAG in-jokes and homages that I’m sure I only caught a few of, since I did not major in film. It was still a lot of fun for me. It demands to be patiently watched, like you’d watch a sunset, or perhaps a neighbor’s open window.

Does that sound creepy? Well, parts of this movie had that same level of creepy in them. Bits that felt like a lampooning of American culture in the 1950’s were lifted directly out of our history. It’s creepy that stuff like that really happened.

The jokes worked, and the musical numbers were wonderful, and the story itself, while seeming disjointed at first, was a really good one that I’m happy to have been told.