I’m amazed by how good SyFy’s The Expanse is. 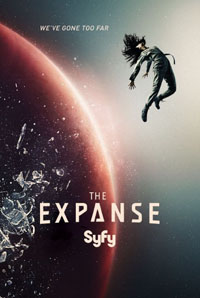 It is head-and-shoulders above anything else in TV science-fiction, with the possible exception of The Martian, which was a movie. Yes, I include Star Trek, Babylon V, and Firefly.

Here’s my stake in the ground: In 2020 we’ll look at the state of science fiction programming, and ask ourselves how we got into this golden age. Then we’ll look back and say “ah. The Expanse. It set a new bar, and for the last five years everybody has been racing to clear it.”

The Expanse has flaws, sure. It’s a television program, after all. The series of books from which it is drawn are solid, but they’re not epic-level standouts of literary science fiction. That’s okay. They’re worlds better than what usually gets turned into TV programming, and the folks working on them are doing everything they can to convince us that the characters we’re following live in space, on asteroids, in accelerating vessels, and (most importantly) in our future.

Minor spoiler: There’s one scene in particular during which a vessel loses power, and stops accelerating. Everything starts floating. Then a hole gets punched through the cabin. The characters still able to move spend no more than three seconds looking shocked, and then they do what people who live in space do. They patch the holes so they don’t run out of air.

The Expanse is very non-episodic, much like Netflix’s Daredevil. Each episode is one act in a multi-act story, and while these acts have beginnings, middles, and ends, the overarching story is never lost as we drive forward. I bought the Season Pass on Amazon because I expect to binge watch this at least a couple of times before (huzzah it got renewed!) Season Two comes out.

We’re only seven episodes in, and the season is short, but if you love science fiction, and you have sufficient discretionary income to let you comfortably put some money where your mouth is, this one’s worth buying now.

Content alert: There’s some PG-13 nudity in episode 1, presumably to rope puerile male viewers into thinking this is Game of Thrones (episodes 2 through 6 have none of that in them). Also, there is PG-13 violence, and can I just say that arterial spray in null-gee is terrifying?