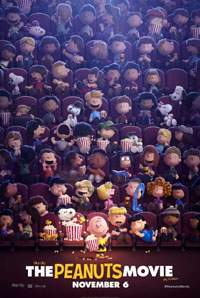 The Peanuts Movie is weird, and I’m conflicted about it. I’ll lead with this: it enters my list at #16, just a hair shy of the Threshold of Awesome.

I doubt very many of you will feel the same way I do.

I was ready to walk out of the film 20 minutes in. We were getting perfectly executed Peanuts jokes in 3D, and I found that so incredibly boring it was almost physically painful. But I stuck around, and at the 40-ish minute mark something different happened, and I was interested again.

By the end of the film I was quite happy with it. I’ve never had that happen before. I’ve never gone from “I may walk out” to “I am SO GLAD I STAYED.”

Let’s get technical for a bit.

I love Charles Schultz’s work ethic, and his economy of line. I can stare at his line work for hours studying the way a nonsense squiggle becomes, in context, the delivery mechanism for a content-rich payload.  I was very concerned that this film would lose that.

I was happy to be wrong. The animators used the computer graphics to provide the context (heads, shoulders, doghouses, kites) and then used what I swear are digitized versions of actual Schultz-squiggles as mouths, eyebrows, and worry-lines. It was a brilliant melding of line-art and computer animation. I was mesmerized.

Most people won’t be. Lines aren’t really all that interesting unless they’re at the beating heart of your career.

Charlie Brown’s try-fail cycle is always kind of depressing. His best efforts are either wrong for the problem, or will be rendered irrelevant by something outside his control. The best kite-flyer in the world cannot compete with a kite-eating tree. Hours of practice kicking footballs mean nothing if the person holding the ball plans to betray you.

A story in which the protagonist continues to try in spite of this has power, and is worth telling. But Charlie Brown is always the punchline. Even his successes are ironic, and outside his control. I can only take so much of this. It’s depressing.

Well, The Peanuts Movie gives us an Act II Twist in which Charlie Brown gets the success he always wanted. This was surprising, and fresh, and even though I knew it couldn’t last, I was interested to see how a triumphant ending could be delivered.

Most folks don’t watch movies this way, deconstructing them on the fly. Again, this was something I really enjoyed doing, but that experience might not be there for you. Especially not now that I’ve told you it’s there. Umm… spoiler alert? Sorry.

The Peanuts Movie is a film for children under the age of ten, and it seeks to keep adults happy with nostalgia. Based on the reactions of the young children in the audience, it worked just fine. I heard a tiny voice exclaim “OH NO CHARLIE BROWN” in dismay, and you know what? That was kind of awesome.