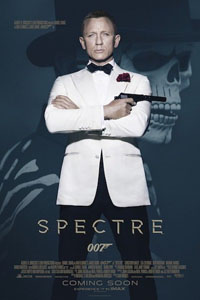 I’m trying to put my finger on why Spectre didn’t work for me. The salient point is that I spent much of the film being bored, so obviously there was a problem.

In Casino Royale we were shown a young James Bond who was unmade and remade by betrayal. In Quantum of Solace we were shown that the brilliance of Casino Royale may have been accidental. In Skyfall, we were given a deconstruction and un-making of Bond as a nice capstone for a trilogy of Daniel Craig installments in the series. It was the perfect book-end opposite Casino Royale. The two films deserved better stuff between them.

And now Spectre comes along and undercuts Skyfall. It is set shortly thereafter, and it tells us that these other Bond adventures were all connected to a single underlying conspiracy, a massive confederacy of hitherto undetected mega-miscreants whose nefarious plans and dastardly schemes are finally coming to fruition.

That’s a hard sell, and they tried to close the deal by giving us something just shy of a clip show.

It didn’t work for me.

Most Bond films are a series of Green-Eggs-And-Ham set-pieces. “Would you, could you, on a boat? Would you, could you, in the throat? Would you could you on a train? Would you hey we’re now in Spain.” And so on. The best Bond films mask this by tying everything together with a multi-layered mystery, with reveal after reveal drawing us into the new locations. The worst ones find us coming to our senses in the middle of an action scene and asking ourselves why we’re in Austria.

On to the good stuff:

Spectre enters my 2015 list at #21. Not awesome, not disappointing, and unfortunately not particularly memorable.