If you’re going to re-imagine a bit of written fiction through film, and if you plan to treat the source material as canonical inspiration for an amendment of that same canon, you’re setting a high bar for yourself. 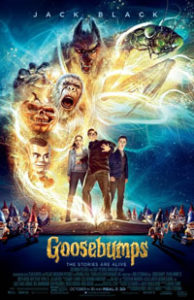 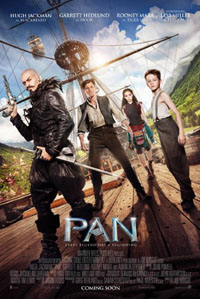 Goosebumps clears it.  Pan does not.

I’ll grant that Pan had a higher bar to clear, what with Barrie’s work being a century-plus-ten-percent old. Still, Goosebumps has been part of the popular consciousness for many moviegoers’ entire lives, so for those folks, both have been around for as long as they can remember.

Pan was clumsy. It was a very by-the-numbers origin story painted over the top of the heroic monomyth, and as others have already said, its biggest mistake was giving us a Peter Pan who was kind, brave, and heroic. That’s not really who Peter Pan IS. Not really.

I have neither time nor patience to enumerate the other mistakes. Pan was pretty, but it made an absolute mess of its mythos, and was head-scratchy and disturbing in the wrong ways (“why did they even MAKE this movie?”) rather than the right ways (“oh, this says so much about the parallels between innocence and evil…”)

Goosebumps, on the other hand, went way out on a limb and gave us a single meta-story in which all of the Goosebumps stories share canon.  To its infinite credit, I did not think of Jumanji even one time while in the theater. If you’re going to borrow a high concept, this is a sure sign you’re pulling it off correctly.

Goosebumps is more of a spooky-action-comedy than a “horror” movie, but the trailers make that pretty clear. Yes, there are creepy dolls and jump scares, but there’s also a lot of running around and successfully DOING things, which makes everything less horrible. The performances were all solid, and Jack Black was very entertaining to watch.