I was pretty sure I didn’t actually need a cinematic event to convince me not to put climbing  Everest on my bucket list, but I’m extra convinced now. 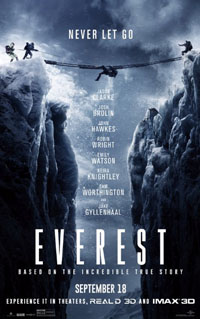 The film was powerful, and beautiful, and tragic. The various accounts of May 10, 1996’s disastrous Everest ascents have appeared in at least half a dozen books, but I doubt the books can convey the story in the way IMAX 3D can. The filmmakers used some cinematic shorthand to make the tale fit a single sitting, of course, but I think they did the story justice.

I came home with a nice feeling regarding my own objectives in life. Climbing to the summit of a really tall mountain is an obvious sort of “look at me” thing, but the overwhelming majority of human people shouldn’t need that specific accomplishment to feel complete. It serves as a nice symbol, and let’s just leave it at that while we get on with doing the things that are important to us.

Everest‘s emotional arc pretty much precluded record-setting “fun,” but I did enjoy the film. It enters my list at #17.