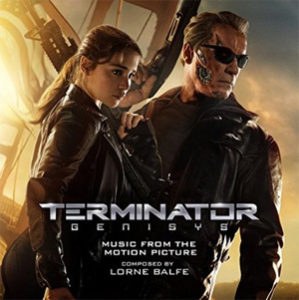 I’m listening to the Terminator: Genisys soundtrack, by Lorne Balfe, as I write this. It is quite good.

Per my remarks on Twitter, Terminator: Genisys is NOT the movie in which Starbuck says to Sarah Connor “this is my friend Neo. We’re here to help with your robot problem.” That impossibly wonderful crossing of the streams was my brother Randy’s idea, and we both know that it’s something we’ll never have.  Perhaps our grandchildren will get it on SpacePirateBay, or Googazon’s hTube, but it will never be ours. 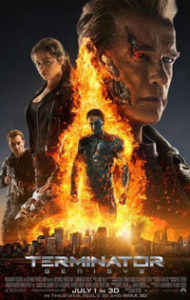 Terminator: Genisys does manage to cross some streams, though, and to great effect. If you’re familiar with the first two films, and perhaps a little confused by the third, the fourth, and the TV show, (the confusion results because you’re trying to use the word “continuity” in conjunction with the words”time” and  “travel,”) you will find that  Terminator: Genisys plays with all of the source material, and will reward those familiar with the franchise for paying attention.

(As of this writing the original Terminator film, starring the inimitable Linda Hamilton as Sarah Connor, is available on Netflix. Should you watch it first? Maybe!)

I would have enjoyed the film much more had I not seen so many cool reveals in the trailers. They telegraph quite a bit of what’s coming, but the studio did manage to hold a few things back, and the surprises were delightful. I want to talk about those things, and how effectively the story turned expectations upside down, but then you’ll have less fun in the theater than I did, and that is almost the exact opposite of what I should be causing to happen with these reviews.

Emilia Clarke, who plays Sarah Connor, initially struck me as looking far too young and tiny for the role. Funny thing: she’s within a year of the same age Linda Hamilton was when she defined Sarah Connor for us in 1984’s Terminator. 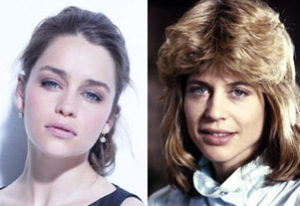 Despite being four inches shorter than Hamilton, Clarke had me convinced by the end of the movie. It’s probably because she’s a fine actress, and has that amazing ability to project herself as larger than life. Not having watched enough Game of Thrones to see her as Daenerys, I can’t speak for everything she does, but that particular piece resumé should speak much more loudly to you than anything I say.

Terminator: Genisys did what few* sixth installments in a cinematic franchise do: it crosses my Threshold of Awesome, entering my 2015 list at #8.

Regarding that, it seems that either my standards are slipping, or this is a good year for movies that I enjoy. Or maybe I’ve become a better judge of what I should see in the theater. My Threshold of Disappointment has only been tripped once (Furious 7), and the middle ground between disappointment and awesome is occupied by three titles: Insurgent, Strange Magic, and Seventh Son.

The year is half over. I hope this does NOT mean that I’ve accrued a stack of movie karma that will require balancing in the coming months.