I had forgotten how good a proper comedy can be. Spy, starring Melissa McCarthy, did everything right. I laughed hard, and left the theater on that happy high that comes from laughter with, rather than laughter at. 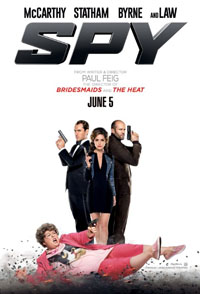 This isn’t a sit-com kind of movie where we laugh at the absurdity that grows out of an absurd situation. It’s a comedy with character, and the absurd situation is actually kind of terrifying. In order to maintain tension we aren’t allowed to laugh at it very much. That’s fine. There’s plenty of funny elsewhere.

After having seen Scarlett Johansson, Charlize Theron, and now Melissa McCarthy in action roles, I’m afraid Scarjo’s Black Widow finishes in a distant third place. Theron’s Furiosa was amazing, and set a new bar, but I’m putting McCarthy’s Susan Cooper over that bar and in first, because she was the only one of the three to ace the delivery of the stand-up-and-cheer moment.

I could write a 5,000-word treatise going into more detail about how this works for me, but I have comics to make and an RPG to write. I’ll just say that Spy clears my Threshold of Awesome, and leaps to the top of my list. I had so much fun…

One of the reasons this movie worked so well for me is that it treats its genre, the super-spy thriller, in much the same way my own Schlock Mercenary treats science fiction.

This quote from writer director Paul Feig is telling:

I’m a big fan of spy movies, and I wanted to create a broad action comedy in that genre. The comedy comes from the characters. It’s not a spoof or satire. The danger and action are genuine. We wanted it to have the tone of a spy film, but still be as funny as we could make it. I also wanted to create a relatable story in which we could all wonder, ‘If I was recruited as a spy and sent on a mission, how might I react?’ —Paul Feig, cited on IMDB

That’s not the only reason it works, but that’s a big one, and for me that was the biggest surprise. I went in expecting a spoof, and what I got instead is the very thing I most love creating.