This is the Mad Max movie I didn’t know I had always wanted until I saw it. Tom Hardy plays Max as crazy-mad instead of angry-mad, and it’s the “seeing things that aren’t there” crazy instead of merely being angry with grief (though, he’s that too. And unhinged.) Also, we see him employ some skills beyond simply driving, taking a beating, and shooting things (though he does plenty of all three of those.) 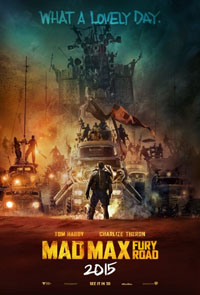 Max’s world is a familiar sort of wasteland, but it has an economy of sorts, requiring a bit less suspension of disbelief. Which is good because we’ll need that stuff for more important things than “how are people still alive at all?” 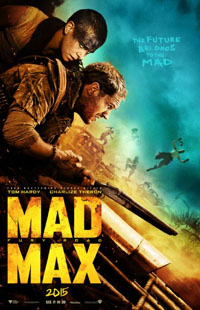 I’ve heard that some folks are complaining that Charlize Theron’s character was somehow too bad-ass, and was upstaging Max. I looked for that, and am happy to report that Max was every bit as awesome as I hoped he would be. If his star seems to shine a little less brightly, it’s because that wasteland is chock-full of crazy-capable bad-asses (including Theron’s Imperator Furiosa,) which makes sense since these are the people who are still alive.

Still alive at the beginning of the movie, anyway.

I love comprehensible action scenes, and MM:FR was full of them. The camera gives us several “savor the moment” shots where the action is so iconic we need to slow down a bit and soak it in before the flames and the dust muddle it up.

The post-apocalyptic aesthetic of the film has its roots in the original Mad Max film, obviously, but that aesthetic has passed through a number of hands over the years, so that by the time it arrives back home in the Mad Max franchise you can taste all kinds of things in the dust, including Fallout: New Vegas, Defiance, and Borderlands. I did not hate that one bit. If Gearbox ever makes a Borderlands movie, I expect it will look like Mad Max: Fury Road with better weapons and more hockey masks.

Mad Max: Fury Road comes in at #4 for me so far this year, clearing my Threshold of Awesome with room to spare. Extra headroom was added by the guy playing a flamethrower guitar while chained to the  front of a stack of speakers on top of a vehicle that has an entire kettle-drum battalion banging away in back.

(That dude convinced me that post-apocalyptic role playing games have room for a bard, provided he has an electric guitar that shoots fire.)