Let me preface this by saying that I was saddened by Paul Walker’s passing, more than a little conflicted at the tragic irony of the manner of his death, and that I haven’t really been following the whole Fast, Furious, and Franchised story. 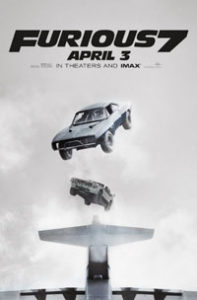 This means that despite the over-the-top action and comic book physics of Furious 7, things that should aim it straight at me, I’m only a peripheral member of the film’s target audience.

With that out of the way: Ugh.

Furious 7 spent far too much time wallowing in manufactured drama that it did not bother to earn. The film seemed to assume that I had been passionately tracking the various F&F character arcs, and was eager to be dropped straight into the kind of moist-eyed, conflicted navel-gazing that most films take an act and a half to set up.

My viewing experience can be summed up as follows.

This went on for two hours and ten minutes, followed by a weird meander into a tribute to Paul Walker which, had it been any more thinly veiled would have been a documentary. And then the credits rolled, and 140 minutes felt far too long for what was basically a set-piece superhero-heist where all of the super powers are indistinguishable flavors of “make cars do absurd things” and “walk away from a rollover that any highway patrolman can tell you is not survivable.”

I’m glad that Paul Walker’s friends got to turn the end of the movie into a farewell, because that’s a nice thing, and I believe more people should be nice, but it felt like it belonged at the end of a different movie.

Furious 7 committed a couple of unforgivable sins: It jumbled up Jason Statham’s fight scenes with jitter-cam, and then did the same thing to Rhonda Rousey’s fight. These are both top-notch physical performers, and their appearances were squandered. That’s sin #1 (though it should count as two.) Sin #2 is that the film took itself very seriously while still expecting me to believe in parachuting cars that can hit a remote mountain highway.

The good news is that I finally have a 2015 film that drops below my threshold of disappointment, providing  the beginnings of symmetry to this year’s list.