I am quite happy to have looked up the length of this film prior to scheduling a trip to the cinema. Per Twitter: 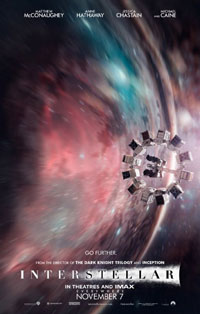 This one didn’t clear the Threshold of Awesome, but it worked well in spite of the way it shamelessly luxuriated in those 169 minutes. Unlike a lot of genre films, Interstellar gives the viewer time to process what’s going on, and to feel what the characters are feeling. It’s good art.

I have two major quibbles with the film: it is deeply pessimistic (or at least it strikes that tone in order to present a cautionary tale) and it deploys the dreaded deus ex machina. Sure, it’s a great story, and there is plenty of human heroism in it, but those two elements dampen my excitement about science, and I’m pretty sure that’s almost exactly the opposite of the reaction the film makers had in mind for me.

In context of those two issues the bad astronomy and crazy astrogeography were only mildly annoying. I know why the film makers did what they did, and those decisions made for a much more powerful human story, but now I want a space travel hard SF movie that doesn’t invoke magic.

But if you’re going to invoke magic, you can’t do it much more beautifully than Interstellar did.