Big Hero 6 ended up being less than what I had hoped for thanks to the trailers. 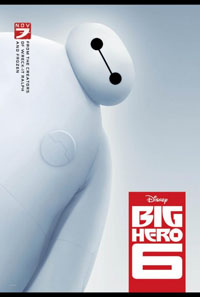 In order to explain why, I need to risk spoiling some things, which I do with great reluctance. Before I start, if you haven’t seen the trailers for Big Hero 6, stop reading this and go see the movie! It’s got lots of heart, and is beautiful, exciting, imaginative, and fun.

And the trailers are misleading.

The trailers make it look like our inciting incident is the scene in which Hiro and Baymax (the boy and the balloon-bodied robot) are attacked by a man in a Kabuki mask who is operating an army of tiny robots.

Nope! Our inciting incident (the thing that sets the whole story in motion) occurs half an hour earlier, and most of the first act is a complete surprise for those who watched the trailers. Unfortunately, the direction of that first act is NOT a surprise, so I spent the first third of the film waiting for a moment that had been described in great detail in the trailer. “Come on, movie, get on with the story you promised me!”

I know, I know, it’s hardly fair to judge a movie by the trailers, but I’ve never claimed to be fair. I had less fun at the theater than I wanted to, and while the film easily clears my Threshold of Disappointment, it didn’t clear my Threshold of Awesome.

I also had some non-trailer problems with the film, and they’re the same sorts of problems I have with the Iron Man films. If, however, you are in the superhero frame of mind, you’ll enjoy things just fine.

(Aside: The short which preceded Big Hero 6 was wonderful.)