In light of the current (Jan 11, 2017) political sitch¹, and given the fact that many people are uncomfortable cold-calling their Congressional representatives, here is a script:

Hello. I’m [ YOUR NAME ] from [CITY, STATE] in the [ZIP] zip code. I want you to take the allegations against Trump seriously, and make sure that he is working for America, not for Russia.

I find it easier to work from a script when cold-calling anybody. This includes my favorite Chinese food place. There’s no shame in having a crib sheet.

If you need contact information, it’s available on the internet. Here’s a full list for Senators, but I found the easiest thing for me to do was Google my rep’s name, and the words “DC Phone number.” Then I picked up the phone and dialed.

That’s actually the hardest part. Pick up the phone and dial.

¹Any political situation that has you concerned² may merit a phone call.

²If you don’t trust your representative, the script may simply be “I don’t trust you. I want you to start doing things to make me trust you.” Congressfolk take that kind of challenge pretty seriously.

On its own merits, Independence Day: Resurgence suffers from a little bit of sequelitis, a lot of “bigger=better,” and felt longer than it really was despite so many cool things happening on screen. I liked it, but did not love it. 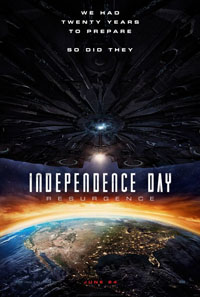 The thing it did right, it did almost perfectly. The events of the first film, set in 1996, are treated as if they happened 20 years ago. It’s now 2016, and the actors who appear in both films played their characters as having aged twenty years. Which the actors actually have. Sequels almost never get to do that to this extent, and I liked it a lot.

And that’s it for the “review” part of this review. If you’re just here for the movie, stop reading now.

Had it not been for the disastrous results of the Brexit referendum, and the “Leave” campaign’s abuse of the word “independence¹,” I might have given this film nothing more than an ordinary review. One of the connections is far too strong for that, however.

See, the thing Independence Day: Resurgence did perfectly is one of many things which the Brexit referendum underscored as a terrible failing.

The film tells a story in which the old people champion a future that the young people have chosen. The older generation in Independence Day: Resurgence has spent twenty years in a world united, and is fighting to preserve it for the next generation.

I don’t know what the UK’s older generation, the ones who voted “Leave,” have spent twenty years thinking, but the younger generation has spent those years looking forward with hope, not backward with fear. With Brexit, the older generation voted against the future that the youth of the UK overwhelmingly desired.

At 48 I guess I’m technically an old person², at least in the eyes of the 18-24yo voters who so overwhelmingly favored remaining in the EU. I’m an old person who has changed his mind numerous times, and who looks back and is appalled at some of what I used to think³. If I’m wise, it’s not because I’m constant, unless you count “constantly learning.” Young me probably would have been won over by words like “sovereignty” and “independence.” Old me sees how connected we all are, and how every single act of ignorant distrust tears at the fabric of the future we want to build.

Fellow old people: Look around.  Listen and learn. That thing you’ve believed for decades may not be true anymore. It might not even have been true then. Inertia is not wisdom, and those who praise common sense are often calling for you to remain ignorant.

Young people: Old people aren’t all jingoistic relics of the isolationism that has been useless since before most of them were born. Some of us want to hand you a world that is better than the one we were handed, better even than the “good old days” that we, in our more honest moments, will admit never actually existed.

¹Along with a many other words.

²There are at least two generations of people who are older than me, and who look at the number 48 and furrow their brows, scowling at me for co-opting their adjective. Sorry. I’m camping on your lawn now, but in ten years I’ll be moving into the house.

³I still hold to the “faith of my fathers,” but I am quite happy to not conflate it with the cultural baggage that so often accompanies it.

You may already know that I tweet. I’m trying out Storify to collect groups of tweets. This is from last night… 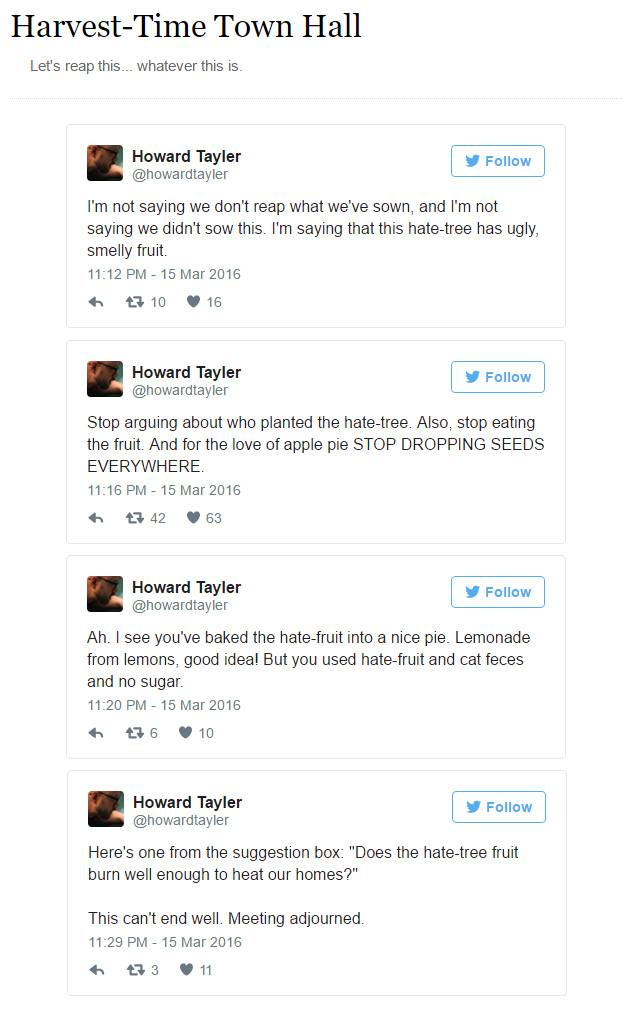 Note: The original Storify iFrame was breaking the Schlock Mercenary mobile app, so I turned it into an image. You can get to the Storify page by clicking on the image. Or on this.

Police kill more young, black males, per capita than any other demographic, and when they do, they are very unlikely to be indicted, let alone convicted. National news has covered this extensively. Locally, here in Utah we’ve learned that police officers kill more people than gang violence or drug crimes do.

There are those who will dispute these facts, citing holes in the data due to the large number of police departments that don’t provide information. Personally, I suspect that if all police departments provided data on Officer Involved Shootings we’d be collectively appalled and ashamed of ourselves. Assuming we’re not already, what with so many police forces not telling us what’s going on.

The law says that police officers have the right and responsibility to use force, up to and including lethal force, in the discharge of their duties. I agree with the law, but I also believe that it takes an enormous amount of training and skill to operate justly, ethically, and morally under that law.

I am afraid that our police officers are currently embedded in a culture where a number of factors, including racism, increase the likelihood that they will use lethal force against unarmed black males. Training and skill notwithstanding, bad things are happening.

I said “factors.” Racism is the big one, but the word “racism” is a heavily overburdened term. It has baggage. When I use it, I’m not suggesting that cops are consciously racist*. I’m saying that there is an unconscious bias in place, and it centers upon skin color. I’ve found racism and other biases in my own work, and they’re hard to root out. So when I say “racism” it’s not an accusation. It’s a diagnosis. (*Note: See “UPDATE” at the end of this post.)

Another factor in play is a bias commonly found among social workers and customer support representatives as well as police officers. Its sufferers tend to suspect the worst in people. It’s like confirmation bias with a dash of PTSD thrown in. In the case of police officers, it increases the likelihood of violent confrontation across the board.

Unfortunately, the mechanisms we have in place to counter this, to discipline officers for excessive violence are too closely tied, organizationally and personally, to the officers subject to discipline. District attorneys and chiefs of police work together closely. In their day-to-day operation, police departments and prosecuting attorneys benefit from departmental and personal cooperation. It’s how they get their jobs done. But this effectiveness has a price: it prevents departments from fully disciplining officers who abuse the powers granted them under the law.

Summarized and oversimplified for impact: Our culture is driving police officers to shoot unarmed black men, and law enforcement agencies default to protecting those officers from the consequences of their actions.

If I were black, I’d be outraged, and terrified, and I would feel helpless to change the system.

I’m white, and frankly, I’m a lot more afraid of police officers than I used to be. I’m outraged, and terrified, and I feel helpless to change the system.

I’m also grieving. I hurt for those who have lost loved ones. I identify with them. I have a daughter Michael Brown’s age. I have a son Tamir Rice’s age. My kids cosplay like Darrien Hunt did.  I’m a little older than Eric Garner, and like him I have asthma, and children. Some might say that it’s a good thing my family and I are white, but that shouldn’t have to be a good thing, and it hurts to know that some might say that.

I am encouraged, however, by the attention this issue is getting. This no longer feels like a story-of-the-week to me. We’re paying attention now, and that means we can change things.

(Aside: “Now that white people are paying attention, we’ll see some changes.” Yes, it kind of reads like that, and yes, that suggests that our entire society operates within a fog of racial biases. I say “fog” because fog is one of those things you don’t really see until you collide with things that it was hiding.)

I have friends, some of them quite close, who are police officers. I hold them in high regard. They tackle a demanding, dangerous job with an attitude of selflessness that I admire and aspire to. One of those friends once told me that he’d rather take a punch than throw one, and would prefer to take a bullet than take a life. In his work, he daily seeks to defuse situations so that they do not come down to kill-or-be-killed decisions. His approach demands a skill set that looks like a mash-up of dual PhDs in sociology and psychology along with being a champion of speed chess.

UPDATE: After reading the DOJ report on their investigation of the Ferguson, MO police department, I’m afraid that in their case I gave them too much benefit of the doubt. While bias-based policing is often unconscious, in Ferguson it was conscious, deliberate, and vicious. From the introductory paragraph to the chilling section entitled “Racial Bias”:

Ferguson’s approach to law enforcement both reflects and reinforces racial bias, including stereotyping. The harms of Ferguson’s police and court practices are borne disproportionately by African Americans, and there is evidence that this is due in part to intentional discrimination on the basis of race.

That DOJ report is exactly the kind of information that the American people need to have about those who police us, and it serves as a horrifying example of what happens when police forces become institutionally unaccountable for their behavior.

(NOTE: Comments are off, and will remain so. This is a position piece, not an invitation to have a discussion. I’ve written my thoughts, and if they inspire you to write yours, there are lots of better places for you to do so.)