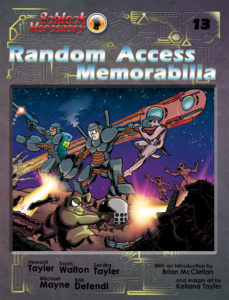 We’ll be printing the book, the Bristlecone ship coin, and then, in February, we’ll do a shirt-specific Kickstarter using designs that this project paid for.

In coming weeks the project page will be updated with samples from the bonus story, which was written by Sandra Tayler and Bob Defendi, and illustrated by Michael Mayne. We’ll also post progress reports weekly, keeping backers and lurkers apprised of how things are coming along.

There may be yet opportunities for latecomers to pre-order the book. I’ll be sure to announce those here, complete with linky things you can click on.

I’m excited to put this book into people’s hands, and I’m very grateful for the opportunity to tell stories and draw pictures for a living. Thank you! 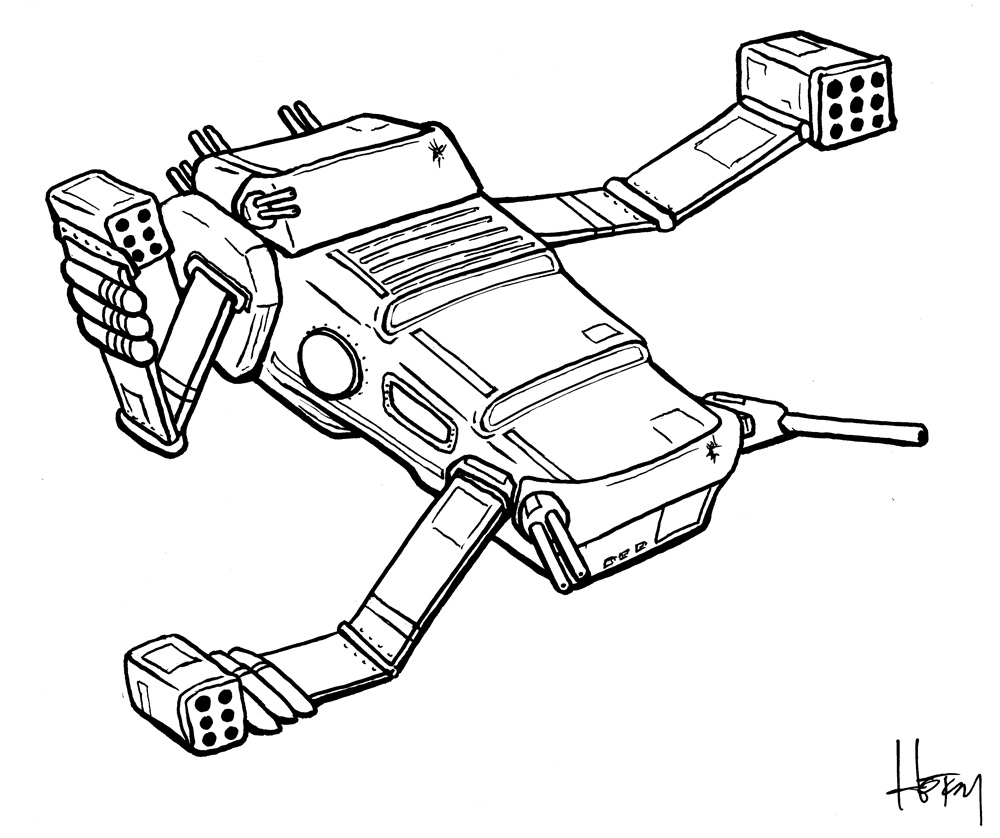 I’ve cleaned this up a bit in Photoshop, but most of what you see is ink on paper (and some white paint on ink.) The next step is to send this off to Travis Walton for coloring, and then it’s off to the coin design folks.

Yesterday I did some repair work on the cover, because the spacecraft streaking past in the background isn’t the right version of that ship.

Here’s the original (with blue lines) 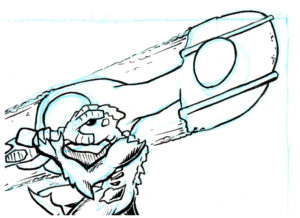 And here, complete with paint smears, is the corrected version. 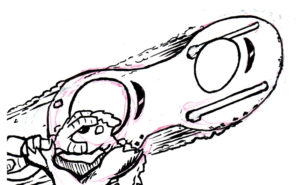 Travis gave me the colored version in time for me to re-lay the cover this morning, so as of this writing, this is what the front cover of the book looks like: 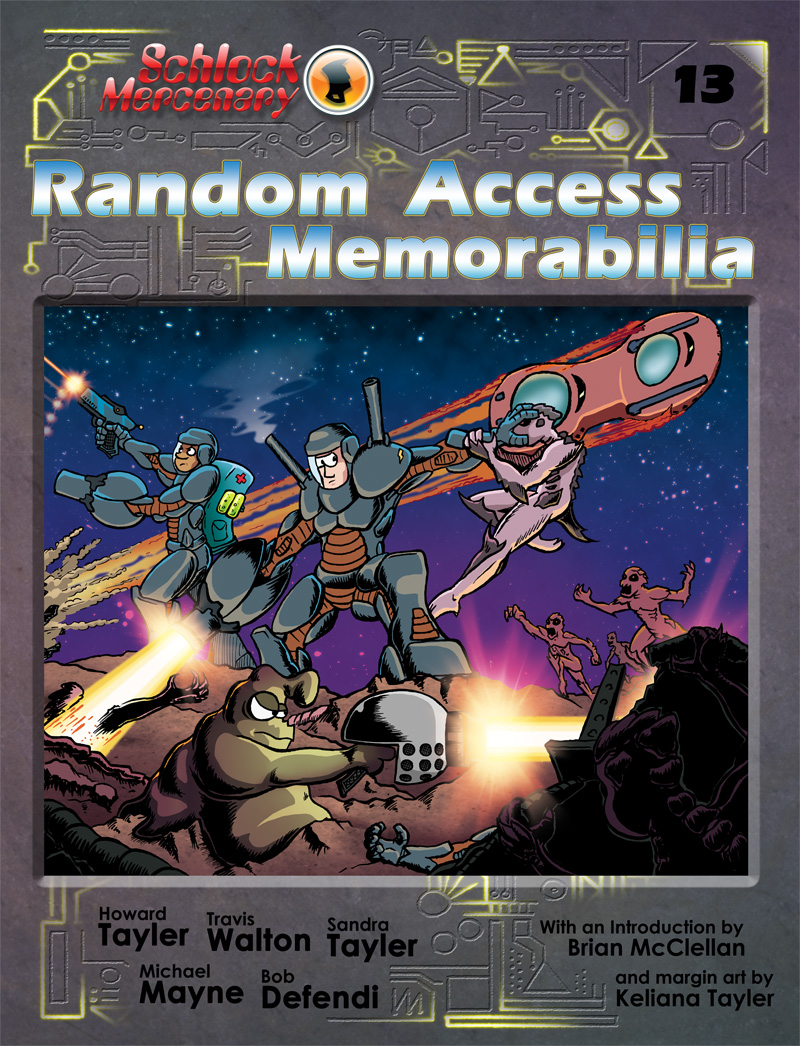 Every time we produce a new book we get a little bit better at it, so it doesn’t surprise me that this is our best book yet. The absence of surprise is not the absence of “wow,” though.

This book is going to be great.

The Kickstarter project for Random Access Memorabilia: Schlock Mercenary Book 13 closes this Friday. Today I finished the first real draft of the cover: 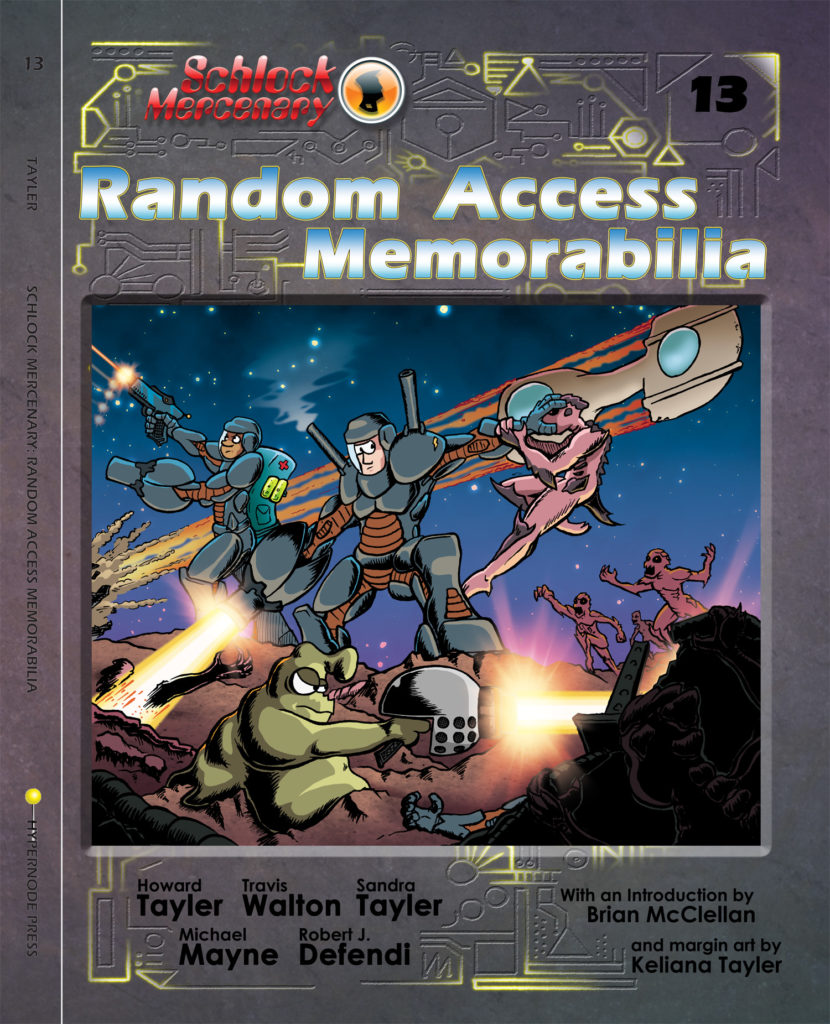 There are a bazillion tiny tweaks yet to make, including color nudging every element, and then re-laying the entire thing in InDesign, but as of right now, the image above is a very fair estimate of what the final cover will look like.

All the details about this book project can be found here.

As part of the Random Access Memorabilia (Book 13) Kickstarter we’ll be doing a ship coin for Bristlecone, which featured prominently in books 12, 13, and 14.  I’ll be drawing this ship again for the coin, and doing so for the first time in a couple of years at least.

In order to get it right, I made a model sheet from some of my favorite drawings of the ship. 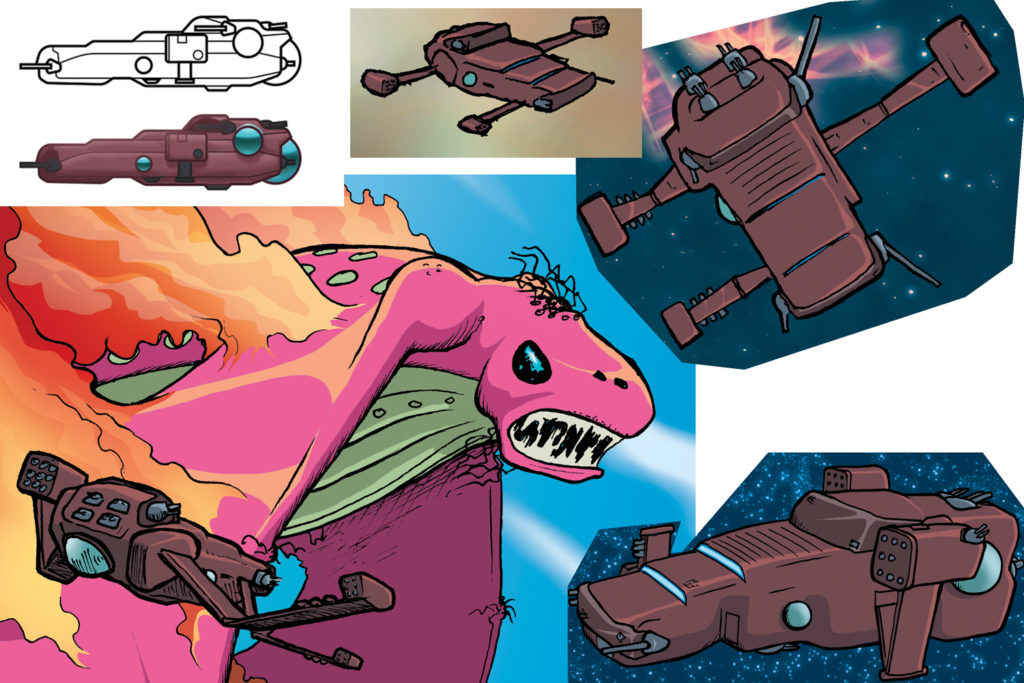 The image in the upper left was rendered by Jeff Zugale¹, who did all the ship design work for Planet Mercenary. Everything else was my line art.

I’ll probably be drawing the ship using a camera angle similar to the upper center, but with more detail, like the images in the lower left (in front of the tufted wing shark¹) and lower right corners.

In the Planet Mercenary RPG, Bristlecone is defined as a Celeschul Orbital Foundries Wyvern-class vessel. The hull and A.I. were built and integrated in the 26th century, but improvements in annie-plant tech led to numerous upgrades. The full history of the ship won’t fit on the coin, but we’ll hit the highlights.

The tufted wing shark² won’t appear on the coin anywhere.

¹ Jeff “Starshipwright” Zugale is doing an art book Kickstarter WITH SPACESHIP TOYS right now, and you should go look at it.
² McConger named the tufted wing shark “Kong,” but xenobiologists ignored the precedent he attempted to set and went with something more descriptive.³
³ At least to humans, who know what the word “shark” means.