I don’t know if video exists¹ beyond this short clip from Brian McClellan’s phone, but for four hours on Thursday I role-played as a bard, while loosely interpreting the game on an overhead projector.

It was a blast. 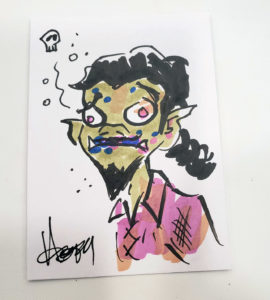 It was also terrifying.

No preliminary sketches, no templates, no “undo” function—I drew on paper, with markers, and we put all the art up for quick sale, proceeds going to the UCASA charity. For just $2.00 audience members could grab one of my sketches AND drop a suggestion in the jar, assigning an action to an NPC named Gallant.

Gallant was a dog. I decided it would be fun if Gallant was that rare, hardy breed commonly known as a were-poodle. It was a risky decision, and during the course of the evening Gallant looked more and more like a demonic sheep².

None of the pictures of Gallant stayed on the table long enough for me to capture them with my phone. One particularly memorable sketch featured Gallant, airborne, urinating on the paladin’s sword. Per the audience’s suggestion, of course. That’s not a thing I’d just DRAW³.

The Typecast RPG Newsletter has lots of pictures in it, and will have many, many more as the game continues. Subscribe here!

¹ If you were there, and have video, send it to @TypecastRPG on Twitter or Instagram so we can share with the world.
² In the future I’ll be grabbing reference art for poodles AND sheep before starting, to make it easier to (HA!) tell the sheep from the fluffy, fluffy wolves.
³ Then again, I did draw a nude-but-for-boxers tiefling sprawled all come-hithery on a petal-dusted bed, so perhaps my standards for these things are lower than any of us thought.