Amazon’s Good Omens miniseries is a rare thing. Exceedingly rare. So rare, in fact, that I can’t off the top of my head name another thing like it, though I’m certain others must exist. It is a TV show which is as good as the great book from which it was adapted.

There have been plenty of TV shows which failed to live up to the brilliance of their namesake novels, and more than a few which have outshone the prose from which they stemmed. And of course there are countless programs which reached equilibrious mediocrity with their so-so source material. 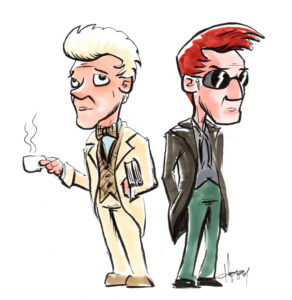 Good Omens, however, is brilliant in both mediums. The book, by Terry Pratchett and Neil Gaiman, is a classic of modern literature. The new miniseries from Amazon is every bit as artful. It plays with the form enough to surprise us, but not so much as to alienate the audience. It subverts some expectations, exceeds others, and will someday serve well as a master class in “how to turn a book into a TV show.”

It’s a far better piece of work than the fan art it inspired from me, but that didn’t even slow me down.