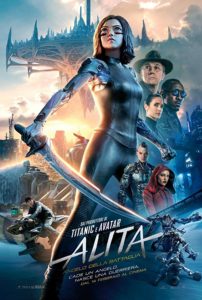 I’m having difficulty summing up my feelings about Alita: Battle Angel. In part this is because the family trip to the movies ended up in an argument about whether or not it was a good movie, and the argument was not one of those pleasant “discuss the film things,” so on that level the film was an utter disaster. I had nothing but regret for the time and money spent on it.

But that’s hardly a fair measure. My 16yo son’s opinion of the film is probably a better metric:

I think the largest part of my difficulty in summing things up is that Alita: Battle Angel had difficulty summing itself up. At various levels it’s a morality play, a sports story, a coming-of-age story, a romance, a noir thriller, a cautionary tale, and a visual spectacle. But unlike many films which try to be too many things, Alita: Battle Angel put in the energy to be each of those things pretty well.

What it didn’t do was finish the job.

To me, it felt like the first two episodes of a ten-episode SyFy series in which they spent their entire ten-episode budget on the first 20% of the production.

It’s gorgeous, and everyone performs perfectly, but it left me unsatisfied, and not in the “leave them wanting more” sense. This was more like “I want a sequel to exist, but I don’t want to have to go see it.”

For my own part, I found Alita: Battle Angel pretty disappointing. And yet I’m with my son on this… I want to get the Blu-Ray so I can see it again.