I finally made it back out of the house to see a movie. I wish I’d enjoyed the movie more. 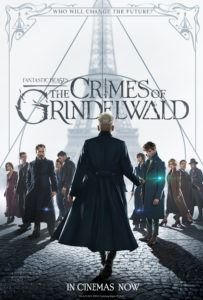 Fantastic Crimes of Beastly Grindelwald or Something Like That suffers from some altogether too common pop-cinema ailments. Unmotivated action, Flanderization, and tokenism top my list, but I should also point out that it felt long and by the end I didn’t really care what happened to key characters, and those are more likely to dampen the spirits of movie-goers.

Unmotivated action is pretty easy to understand. It’s when you don’t think a character would do a thing, and the story never gets around to explaining why the character did the thing.

Flanderization is when a character in a series begins as a well-rounded, interesting person with quirks, but as the series progresses they are defined only by their quirks. It gets its name from Ned Flanders of Simpsons fame. Fantastic Beast’s Queenie Goldstein captivated us in the first film with her mind-reading, her smarts, her cooking, her effortless beauty, her kindness, and yes, being a little ditzy. This film mostly just gave us ditzy. It was pretty disappointing.

Tokenism is when a demographic is represented by only one character in the film, and it’s made worse when that character falls into one or more negative stereotypes. The only Asian woman in the film, Nagini, played by Claudia Kim (you may remember her as Doctor Helen Cho from Age of Ultron) happens to be cursed to turn into a giant serpent. Because serpent-ness is an Asian thing?

The good news is that everyone on screen did brilliantly with what they were given. Even when they weren’t given very much, they acted it to the nines, and did everything they could to make it work.

Fantastic Beasts: The Crimes of Grindelwald doesn’t quite fall past my Threshold of Disappointment because I wasn’t expecting much. It doesn’t clear my Threshold of Awesome, however, which leaves it in far too ordinary a place for something with “fantastic” right in the title.