Before I begin my review, a public service announcement: Incredibles 2 may trigger seizures in sufferers of photosensitive epilepsy¹, and may in other ways afflict anyone who is sensitive to flashing lights. Seriously. There’s a fight scene in a room full of patterned strobes, and in the darkened theater there will be no steady-state light source to provide refuge for your eyes. The scene is only a small slice of the movie but it’s enough to absolutely ruin your day if flashing lights can hurt you. 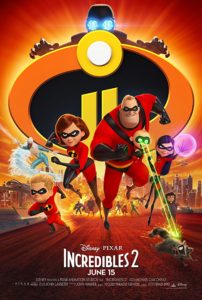 And now, the review: I really enjoyed Incredibles 2, but it petered out for me toward the end. My very favorite super-powered engagement took place mid-movie, and while there were plenty of cool heroic bits later, none of them lived up to that level of awesome.

Still, it’s a fun film. It suffers mostly in comparison to Incredibles, which is to my mind the best Fantastic Four film we’ve ever had (in the same way that Galaxy Quest is the best Star Trek film we’ve ever had².) Incredibles 2 doesn’t clear my Threshold of Awesome, but I definitely want to see it again. In my own home, where I can fast-foward through the flashing lights, because they triggered a brief migraine, and I already get enough of those.

¹ I’m not a medical professional, nor an expert in epilepsy, but that scene hurt *me* and I’m just a guy who sometimes gets migraines. The picture on the Epilepsy Foundation’s page? Imagine that, strobing, only without the helpful yellow bits.
² “How can it be, if it’s not ACTUALLY a Star Trek film?” Hence the comparison. It’s kind of nuanced.