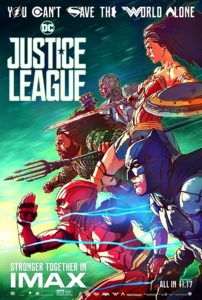 Justice League is a lot of fun. Also, it shows promise. Maybe, just maybe, DC Comics films will finally shake free of the desaturated joylessness that has been their hallmark for a decade. This summer’s Wonder Woman was brilliant and beautiful, and Justice League, though not quite up to that standard, is fun, and triumphant, and (eventually) colorful.

Yes, it begins with sepia-toned misery, but then? Well, okay, then things get worse, but the film doesn’t wallow in that for too long. Okay, yes, it does wallow in that for a while, but then it finishes wallowing and gets on with the heroic, colorful business of being a superhero movie that reminds us why we love comic book heroes.

Justice League clears my Threshold of Awesome, and it also clears my “must own the soundtrack” bar, because Elfman reprised not only his own 1989 Batman theme, but also John Williams’ 1977 Superman theme.