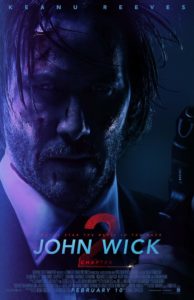 Dog lovers might appreciate knowing that the death of a dog is not Wick’s impetus in this film¹. Car lovers² will appreciate John Leguizamo’s estimate about how soon Wick’s car can be fixed. People who love witty dialog in the style of superhero banter should probably just re-watch one of the Avengers films, or at least not show up for this film with high hopes for any of that.

I enjoyed John Wick 2, but it does not clear my Threshold of Awesome. The fight scenes are every bit as amazing as they were in the first movie, but the story is on rails. There are no plot twists, unless you count employer treachery as a twist, which is about as unexpected as a meet-cute³ in a romantic comedy.

So, you know… enjoy the fight scenes, and pretend that the world will be a better place without any of these nameless thugs, who probably eat babies with a garnish of puppy.

¹ I was asked very specifically about dogs by someone on Twitter.
² I was not asked about cars.
³ If you re-watch THE MATRIX before seeing this film, pay attention to the meeting between Reeves’ character and Lawrence Fishburne’s character. I think they re-used some dialog on purpose, just to see if they could.